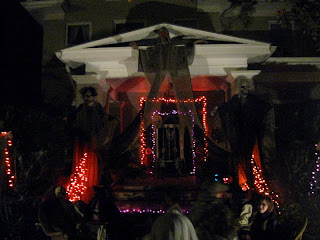 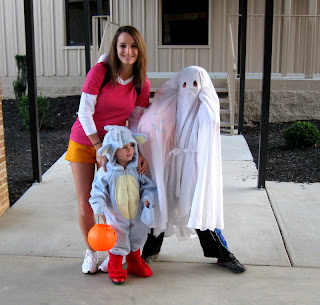 Hi guys! I wanted to share my trick or treating experience! I must apologize in advance for my awful photo quality..I should have changed my camera setting to nightscape but didn't think about it until after the fact! These are my 3 tricksters. The ghost is my 9 yr old son Jack and Dora is my daughter Alexa. Boots is her 3 yr old my grandson Hunter. She made his and her costumes. We traditionally start out our Halloween route at one of the local churches. They have trunk or treat and carnival games the kids like. Also free cotton candy this year that Jack was attempting to eat through his eye hole! You may note his costume is much more "low tech" than Boot's. He told me, "I want to be a CLASSIC ghost..you know Mom, a sheet with 2 eye holes?" I wasn't going to argue! We had to laugh later when a girl his age passed him and said"Ghost with sheet and 2 eye holes...classic!" She "got" his deal and he was tickled! 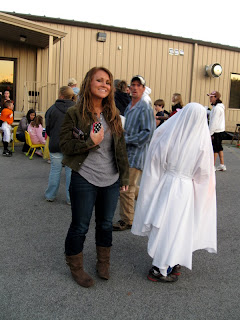 This is my other daughter Hope who went along for the fun and memories. We have been trick or treating this same route since she was a baby! She is an old 23 yr old lady now! (Note new IPhone cradled lovingly in her hand) Hi Random Background Dude! *waves* 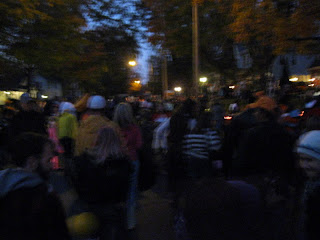 There is a street in town with all the old Victorian era houses. It is lined with big old oaks and maples and Halloween usually coincides with peak leaf season here. Usually you are shin deep in fallen leaves, but this year we are a smidge late and they are just starting to fall. They block this street off now as thousands of out of town people descend..they even put out porta potties this year! Lots of people decorate, but I don't think as many pass out candy as they used to. It used to be almost every house, but once the TorT numbers hit 1000's some of them understandably quit handing out candy! I think the city should buy it for the people on this street. 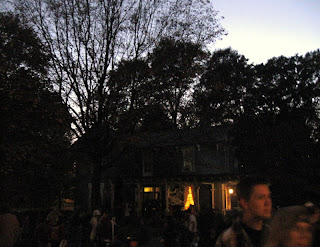 Children AND adults dress up. Hope said if you are trick or treating and actually going to the door for candy, you should not have your treat bag in one hand and a cigarette in the other! (And yes we saw that) 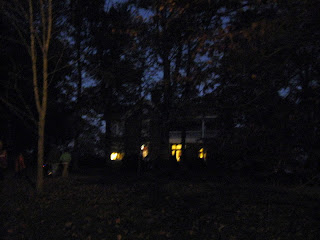 This house sits back off the street a bit for a long spooky walk to the front door.. 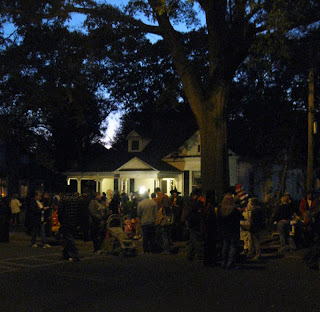 One of the local teachers reeeaaally does his house BIG. (This is not the house) He has headstones, coffins, stuff hanging from the trees, and lots of dressed highschool students, a fog machine, spooky music and screams and chainsaw noises. You have to walk through a spooky mansion (tent) to get up his sidewalk to the candy. My son has not been brave enough yet! There were so many people in front of it I could not even get a picture..there was even the local news team and cameras! 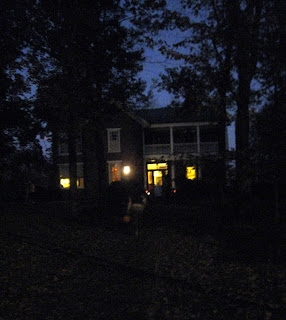 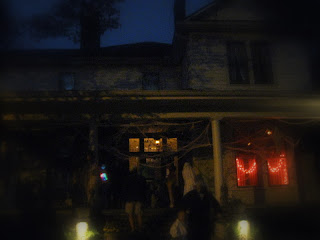 This one was sort of creepy without really trying! 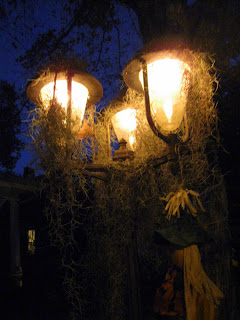 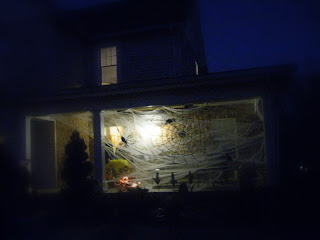 This is my banker's house..I am pretty sure Paul is not responsible for the decor. 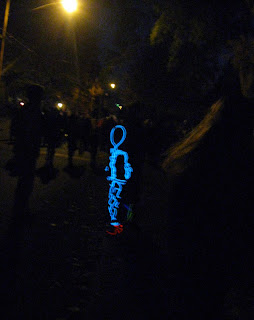 This kid had a cool neon outfit..I had not seen this before. 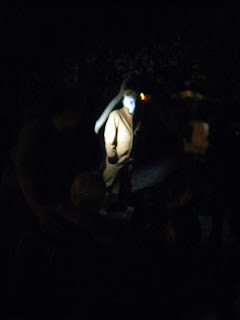 Micheal Myers was at one house. It was an actual guy and he just stood there menacingly while they played that creepy movie music! You had to pass him to get to the candy. He may have grabbed at some people but I didn't get that close! My daughters reminisced about which houses used to have the "good candy" and who handed out pencils. We stopped at one of my oldest son's friend's parent's house. I said "Paul always was such a cute little boy" Hope said " He still is." and pulled up his FB profile on her IPhone.."Oh look..he is single as of Sept. 8th!" I said in the Olden Days you would have had to went up to the door and pumped his mom for that info and made a couple actual phone calls! LOL These kids are spoiled. Of course the creepiest house is the one that an aquaintence of mine lives in just off that street. She says it actually IS haunted! Lights keep turning randomly off and on and whatnot especially in the attic! Hope you had a fun Halloween too! Til next time, Julia
Posted by hopeandjoyhome at 7:20 AM

Your neighborhood takes halloween seriously! What a crowd! It's definitely more low key here, but then some people put up the strangest lights.

That was fun! Thanks for the vicarious virtual treat.