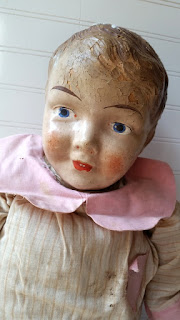 Hi guys! I got into another box of vintage dolls to picture and list. 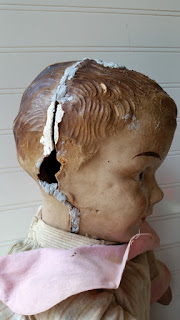 This poor old boy has an awful repair. A new air clay ear and a proper repair would go a long way! 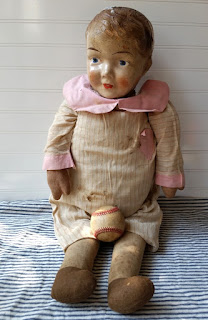 He is old with an excelsior stuffed cloth body. He has a definite "boy" face. Unmarked and odd. 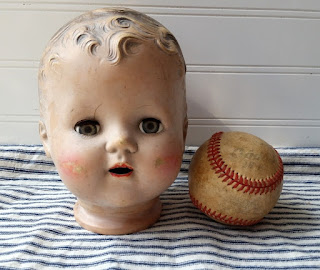 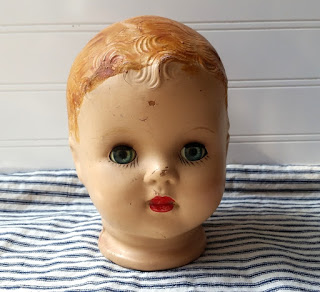 This one was marked PLAYTHING on her neck. Google told me "unknown US Maker". She used to have a wig. Pretty aqua eyes! 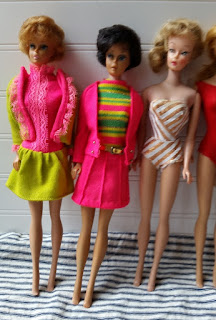 Vintage Barbies I put on EBay. I love the 1960's outfits. I had Barbie paper dolls in the mid/late 60's that had these outfits in them! My first Barbie was a red headed Stacey with bendable legs. I was 1st grade and a boy in my class informed me "his sister stopped playing with Barbies when she was 4!" I held a grudge against him for years for bursting my joy bubble! My mom worried her boobs were too big for a little girl's doll..lol. My next were in the "Malibu era" I didn't have a lot of Barbies, but my sisters and I had a dollhouse we made them of cardboard boxes and spent HOURS playing. 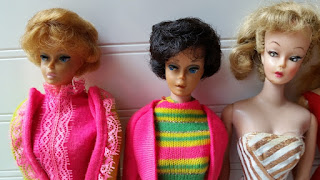 These are bubble cut (hairdos) with the straight legs. The ponytail one on the right is a bit older. Her but is marked 1958 but someone told me her head may be a Barbie clone head that got switched. Not sure. 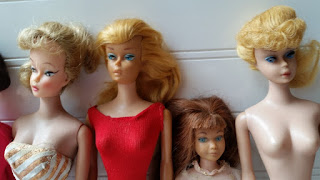 The red suit one is supposed to have a pony tail. Original red swimsuit. A red haired Skipper marked 1963 and a curly banged ponytail Barbie with no clothes..and no fingers..chewed off or some sort of big brother accident? 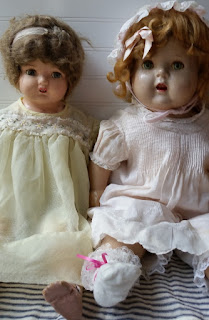 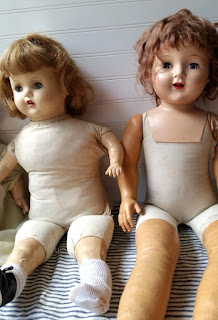 The proportion of the head and body to the arms and legs was not always spot on! Tiny T-Rex arms! The one on the right has "real" magic skin..eek! Those creep me and the skin never ages well. They spring leaks and the stuffing comes out. 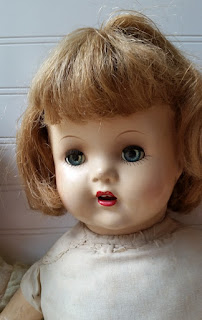 Cute face..marked PLAYTHING too She has her wig! 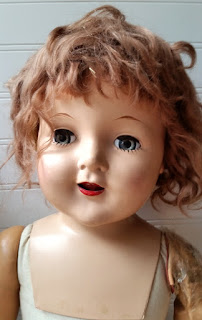 This is what my hair looks like in the morning..if I am lucky... 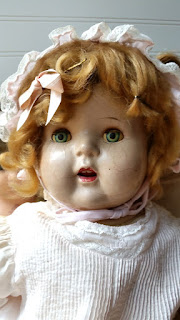 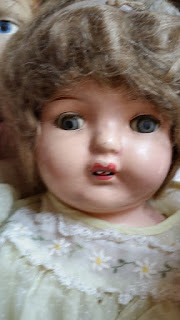 OK..this poor buck toothed one is a bit creepy..my camera refused to focus on her face! LOL I am trying to list other items besides dolls in my shop also. So check back and see what I find! 'Til then! Julia
Posted by hopeandjoyhome at 10:26 AM