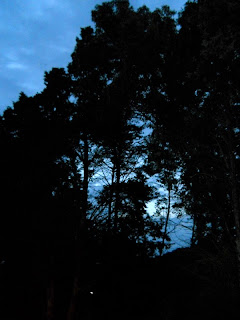 Hi guys! We just got back home this evening from a couple days away in Atlanta. We had our 31st anniversary this week (wow!) I can't believe it has been that long! I guess that is a good thing..if it was bad, it would have felt longer! We decided to do a mini get away and being us, decided to spend it partially working. This weekend was the Americasmart weekend in Atlanta. Americasmart is 3 large 10 to 19 story buildings of wholesale merchandise. Think of it as a ginormous mall for storekeepers. Some of the showrooms are open monthly, but the 2 major weeks are in January and July. We no longer have our brick and mortar antique/vintage /gift store, but we still buy for some of our online shops, our booths and for some shows that we do. We also went to Scott's Antiques Flea Market and picked up some things for our Etsy shops. My feet are killing me! More about that later. I took some pics with my phone and if they turn out, I will do a post on what we saw. Of course, they are trapped on my phone because we don't get service at our house! I'll have to remember to email them to myself after church tomorrow. We had fun, but it was good to get home. I took a glass of wine out on the deck to watch the fireflies and relax. Of course the grand-dog Sarge had to keep me company! I love the images of trees at twilight..the black silhouettes remind me of mochaware pottery. (That white light at the bottom is a firefly..they are trixie to photo.) 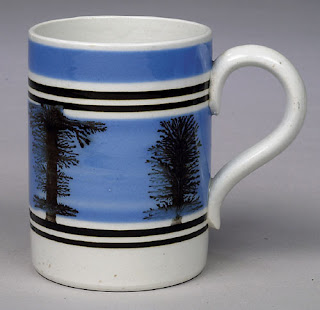 Mocha decorated pottery is a type of dipped ware (slip-decorated, lathe-turned, utilitarian earthenware), mocha or mochaware, in addition to colored slip bands on white and buff-colored bodies, is adorned with dendritic (tree-like or branching) markings resembling the natural geological markings on moss agate, known as "mocha stone" in Great Britain in the late 18th century. The stone was imported from Arabia through the port of Mocha (al Mukha in Yemen) from whence came large supplies of coffee. An unknown potter or turner discovered that by dripping a colored acidic solution into wet alkaline slip on a pot body, the color would instantly ramify into the dendritic random markings that fit into the tradition of imitating geological surfaces prevalent in the potteries of that period. The earliest known dated example (1799) is a mug in the collection of the Christchurch Mansion Museum in Ipswich, England. Archival references are known that suggest production began as early as 1792.

So basically..mid 1800's pottery with tree (or sometimes referred to as seaweed) markings! 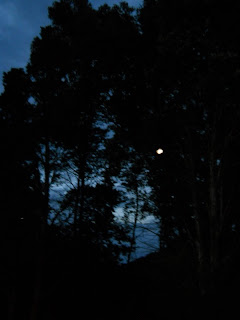 Caught another firefly here! They are a favorite of mine. They basically hatch..seek out a mate with lots of blinking, mate, lay eggs and croak. That's not WHY they are my favorites..they are just magical. We are lucky enough to have them here. At high season the yard looks like a Studio 54 for fireflies...twinkling in the trees and shrubs and across the lawn like Christmas twinkle lights. As the season goes on..the stragglers are left for a pitiful "last call"..I believe a lot of us have seen the same frenzied desperation as the bar is closing for the night and not everyone has found "a special someone" yet. Lots prettier when they are fireflies! 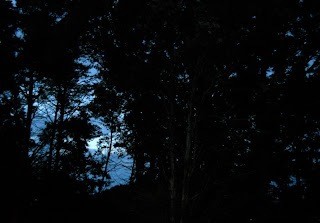 It was so peaceful out there... East TN is fairly hilly to mountainous. Here in Sweetwater, we are in the valley. Sunsets get sort of lost most nights as the actual horizon is blocked.Sometimes we have a good one, but they are not as spectacular as they South Dakota sunsets of my youth. It is pretty flat there and you can see for miles to the horizon. Below is a photo taken by my niece Kori of a SD sunset last month. 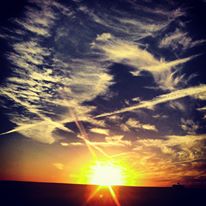 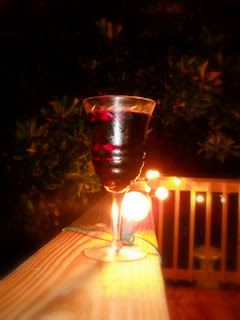 And here is my glass of wine posing for a glamour shot. I got the string lights at Target. We've already managed to break 2 bulbs..oh well! That's our magnolia tree in the background. It has been blooming. They have dinner plate sized heavy white blooms that have a very heavy scent..a bit green and a bit jasmine. Alas, they do not make good cut flowers as they brown quickly. Sarge and I had to vacate the deck shortly after this as the scent of skunk wafted in from the trees down the hill from us...oh well..so much for my Zen moment! Stop back and see my Americasmart and Fleamarket pix! Until then! Julia
Posted by hopeandjoyhome at 8:08 PM