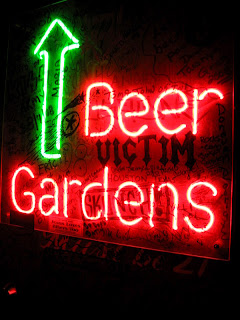 Last week I flew to Denver and met up w/ my sister Janet and her friend from work Judy. We packed Janet's little red Chevy HHR (like a PT Cruiser) and set off for Sturgis South Dakota to meet my other 4 sisters for a sisters week. We had to make difficult choices..beer cooler or lawn chairs? Beer cooler or lawn chairs...BEER COOLER! We met up with the other 4 sisters at our campground for the week Hog Heaven. I must totally recommend this place. It was grassy and shaded by trees and had many nooks and crannies to pitch your tents. There were good bath/shower houses, they cleaned the porta potties daily (yay!) and the food was good and HUGE. I got nachos supreme one day and 3 of us couldn't finish it and I was starving! They came in an 8x10 pan! Also good coffees every morning and the other campers were the quiet, non scary sort. We spent the week laughing our heads off, shopping, and hit the bars every night. This is little old me who never goes out anymore so I was a bit tired when the week was done and my feet were killing me! I know we walked 5+ miles every day. I wore my shoes out and had to buy a new pair! 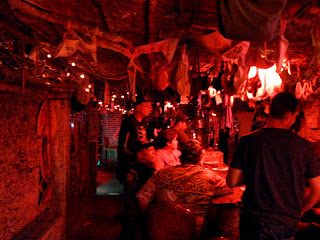 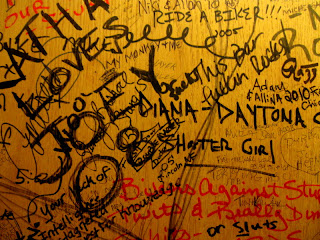 The graffiti was amazing to me..it covered every square inch of the place. 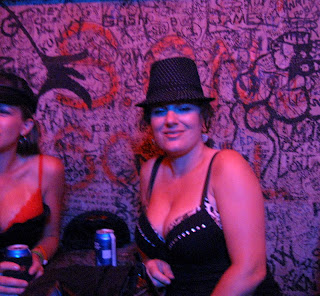 Here I am looking rather hammered, but it is really just that I am not very photogenic and when I smile, my eyes turn into catty little slits. Now this is NOT my regular outfit for the grocery store or the post office, but when in Rome..yada, yada, yada..I am the oldest sister and at almost 49, I had the joy of trying to keep up with all my younger, thinner, firmer sisters! "Hoist yer main sails Ladies!" LOL 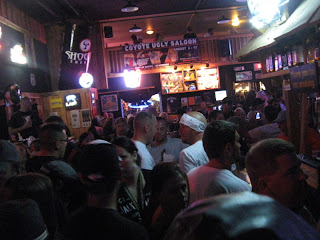 This was the Loud American bar. The bars were packed every night and they all had bands..it was great. 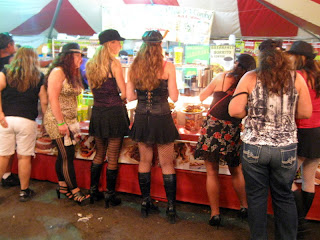 Post bar food....It smelled great but by this point I had the hiccups and passed on the food!(Then I ate off my sister's plates and the hiccups went away!) 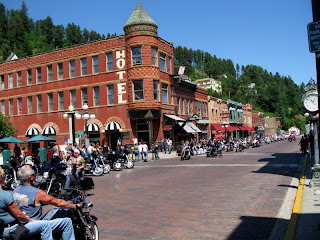 This is Deadwood. I really loved the old architecture there. 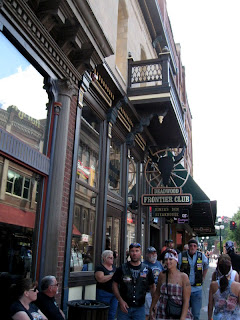 Random people on the street.. 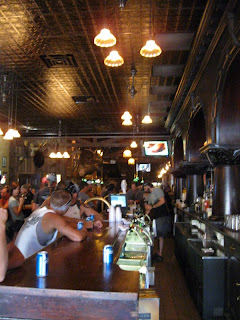 This is inside the bar where Wild Bill Hickock was shot..fab back bar and tin ceilings! 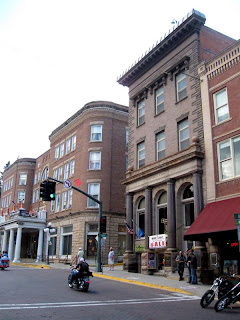 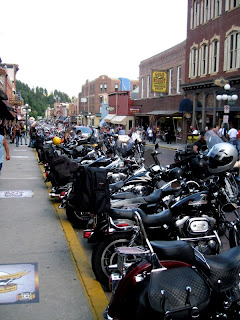 Parked bikes..there were thousands of bikes parked and driving by. 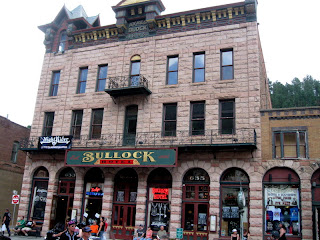 Ok..I have a thing for old buildings! 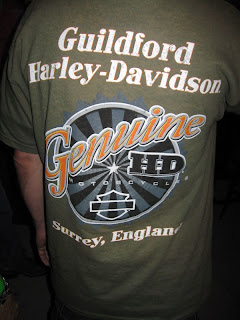 This is John, a guy from England we met. He was camping at the Buffalo Chip next to one of my brothers-in-law and he adopted him. He was quiet and sweet and danced like one of the kids from Charlie Brown..his feet never moved and he bopped his upper body about and just never quit smiling! He flew to Denver and rented a Harley and drove to Sturgis all alone. We were impressed by his spirit. I asked him about it and he said his friends weren't into bikes as much as he was and he had recently gotten divorced after 15 years and was now doing whatever he wanted to! LOL 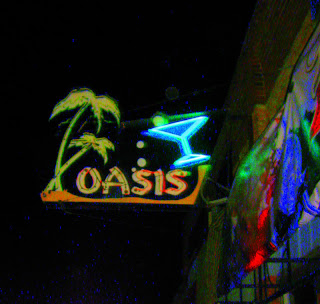 The Oasis..we were in here a couple times. One afternoon a couple of the sisters entertained us with their Karaoke singing! 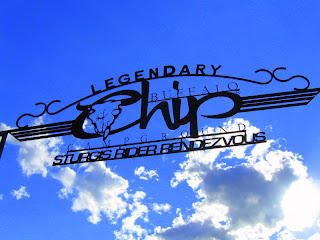 The Buffalo CHIIIIIIIPPPP! That is how the dude that runs it would say it when he was onstage at the concert. We stayed one night here and went to Buck Cherry and Def Leppard. The Chip is a huuuge campground..no shade..questionable portapotties and crazy people. They partied, screamed and reved their bikes nonstop all night long. Fun but not restful! 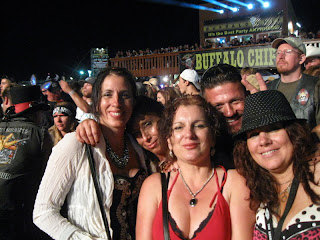 My sis Laura, Judy , me in red, my BIL's friend Dave and my sis Janet at Def Leppard. She is a huge fan and had a VIP pass to get right up front. She sees them as many times as she can. I like Def Leppard..a blast from my illspent youth, but they were a bit rough vocally on some of the songs. Buck Cherry I had seen before and they were as good as ever..I think Josh has some new tatts since the last time I saw their show! 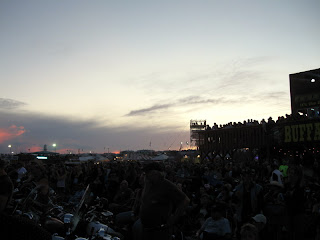 The bikes were parked right in the crowd and there were thousands of them there. If they liked a song or wanted an encore, they just started rev-ving them up..it was insanely loud and totally cool! Judy got to sit on the biker next to us's handlebars..she had fun! 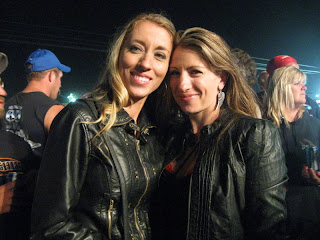 My 2 youngest sisters Jess and Aron 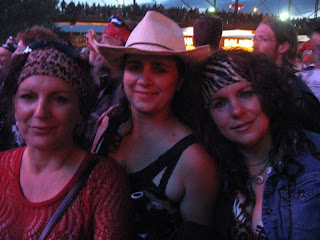 Here we are at the Full Throttle at Ted Nugent. To say Ted is right wing is like saying the sun is hot, but DAMN can he and his band still rock it! They sounded fabulous. This is me & my sisters Andrea and Janet 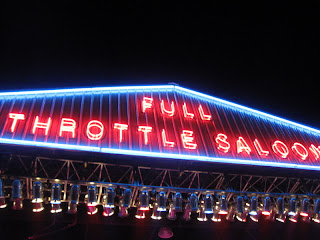 The Full Throttle was huge and packed..there were thousands of people..and 30 portapotties..baddddddddd. The line was 3 blocks long, it was ridiculous. People stopped buying beer because they didn't want to have to get back in that line! Bad business practice..they needed twice as many at least. I also had the joy of not quite getting my door latch slid to occupied and had the door ripped open by a burly biker. I may have shreiked a bit..or a lot.. 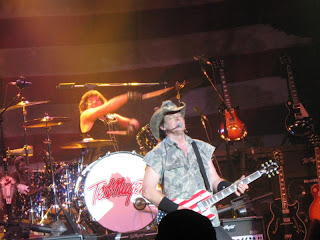 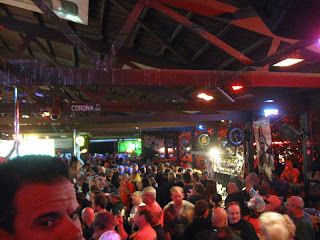 This was a tiny portion of the bar..packed. 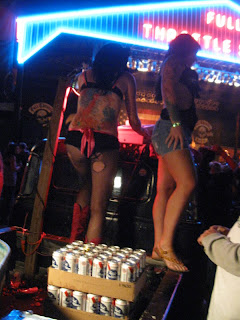 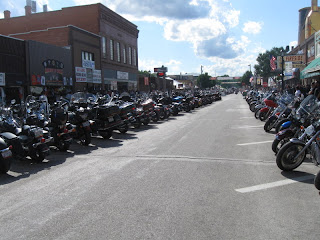 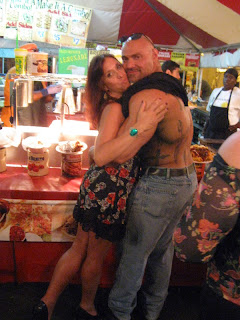 Judy found a man! She was the only single lady and anytime we were hit on we would tell her to "take one for the team"..she wasn't very cooperative! We did have a semi stalker in the form of a 65 yr old dude named Fitzie who owns 3 liquor stores and 3 convenience stores in Atlanta. He was funny and naughty and just kept popping up where ever we went. We decided he must have put a tracking device on one of us! 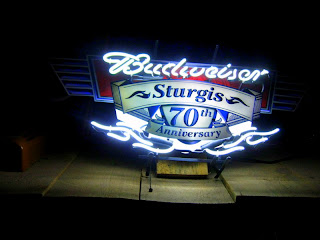 Not sure that I will have a return trip as I am not much of a camper..ok..this was my first time in a tent..and by the number of times I mentioned the word "porta potty" you may have come to the rightful conclusion that they are NOT my fav (or even close). It was great fun though with my sisters..soooo much laughing. I shared a tent w/ my sis Janet and her air mattress had a slow leak so every night she aired it up and every morning we were bottomed out in the middle like a double hot dog! It was damp and cold at night..I usually wore my clothes to bed and one night, my coat. I did survive though and made it back home in one piece, back to no sisters close except on facebook and my loving family who missed me as much as I did them. I told my husband he is officially the best brother in law of the lot. My 8 yr old Jack said he was" broken hearted and was missing a piece of his soul" while I was gone..such drama! LOL Now back to my officially boring mom life..and I love it! Til next time! Julia
Posted by hopeandjoyhome at 6:51 PM

LOVE IT!!! I am from SD and haven't been to the Rally in years (*sniff*). It is on my to-do list to get my hubby there pronto. Glad you had so much fun!!