Hi guys! Lots of tales to tell from the weekend.We went estate sale-ing on Saturday. I found this fabulous vintage double wedding ring variation quilt top. The fabrics are feedsack and other depression era prints. The rings are huge! The main ones are 29" across. The small polka dots are what I love about it and what makes it unusual. They are ping pong ball sized and there are over 500 of them on the quilt top! Circles are hard to applique and small ones even more so. Truly masterful. 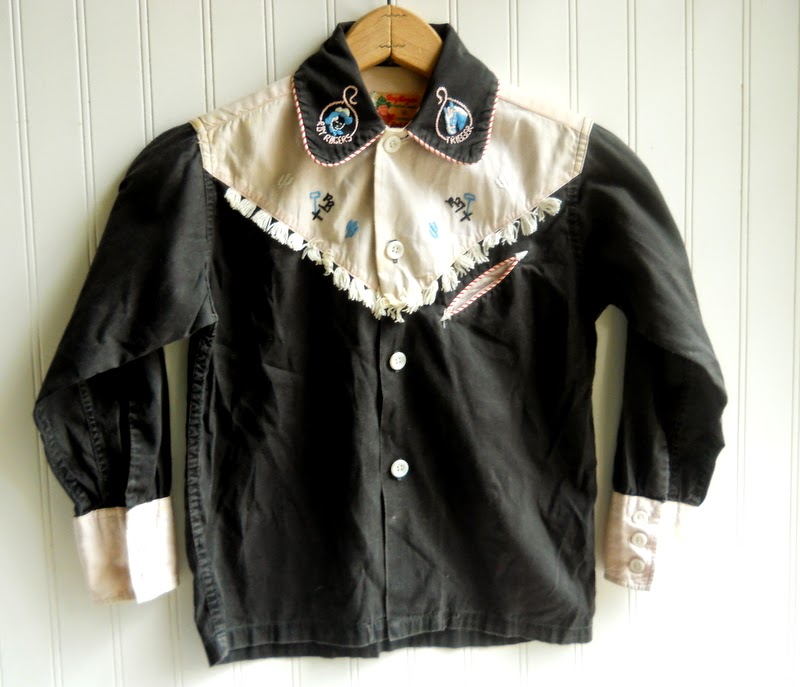 I got a bag full of vintage children's clothes too. This Roy Rogers and Trigger shirt was inside. 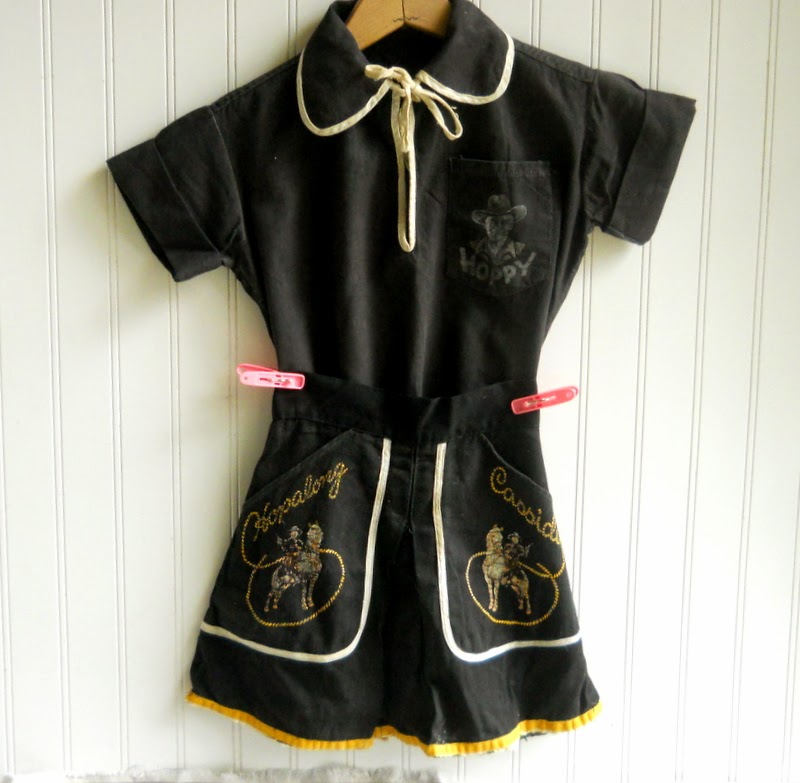 And this Hop Along Cassidy shirt and skirt. The skirt appears to have had its vinyl fringe trimmed off the bottom but oh well. 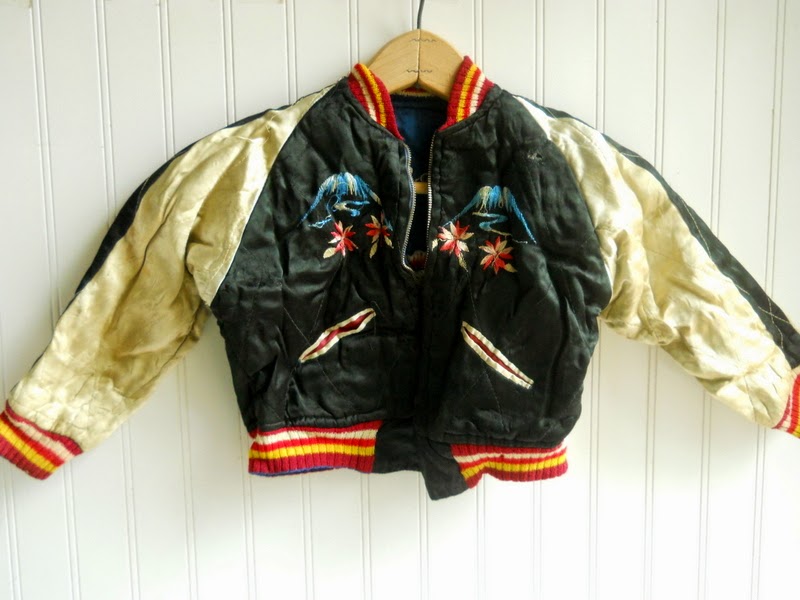 There was this vintage reversible child's silk souvenir jacket from Japan. 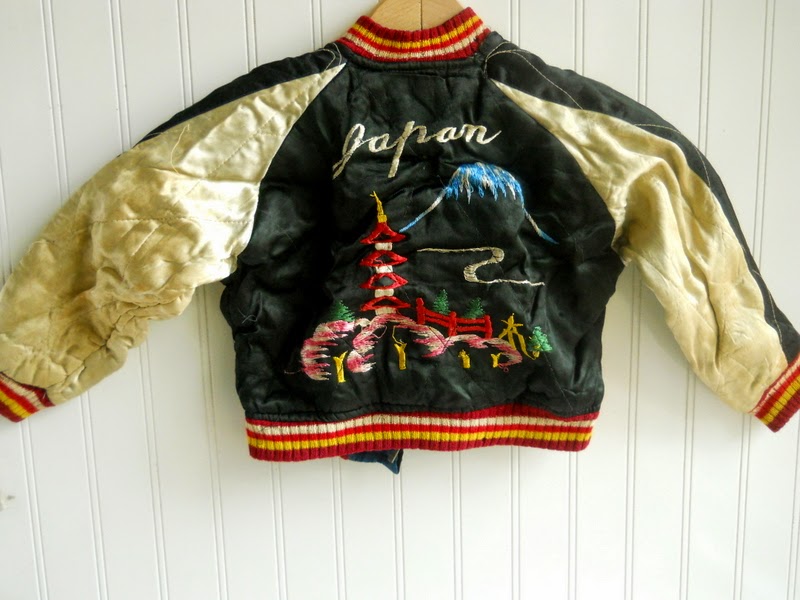 Kid's generally got these when their military dad's were stationed there. I remember a kid in my 2nd grade class having one that I thought was pretty cool. 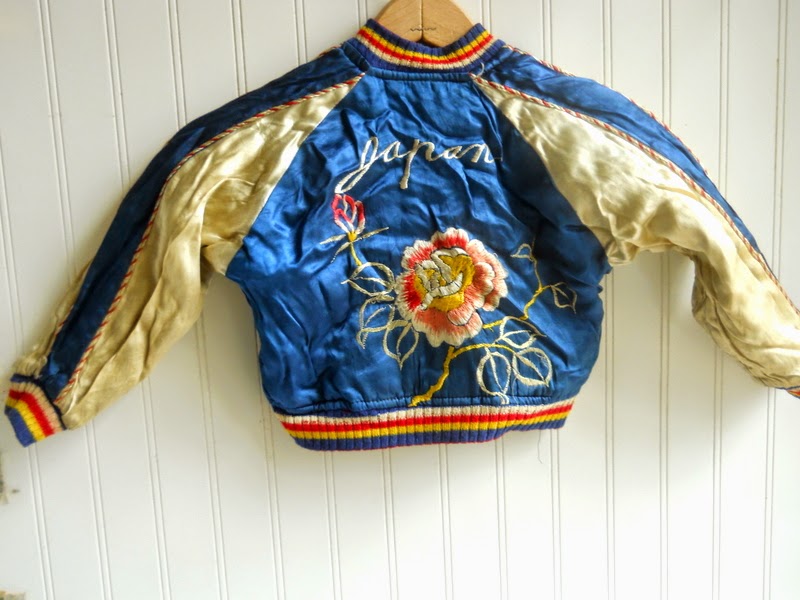 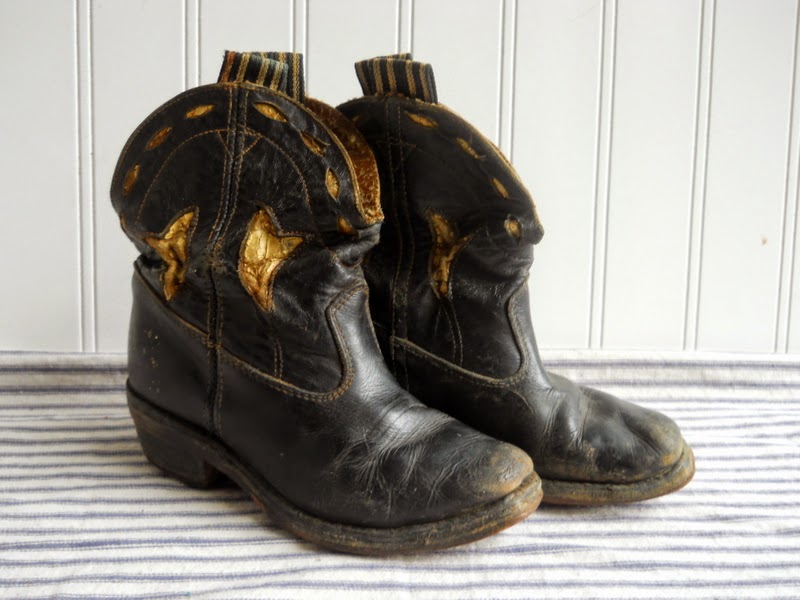 These cute kid's boots were in the bag. They are leather and shabby on the inside so I saw no maker..cute for decor! I had a pair that I got as hand me down's from my older boy cousin that I wore until they absolutely didn't fit anymore. I was about 6 and I generally wore them with dresses! I had a little toad jump in one once when I had left them outside the front door..that is an unpleasant surprise on a bare foot! The toad was fine..I was traumatized! 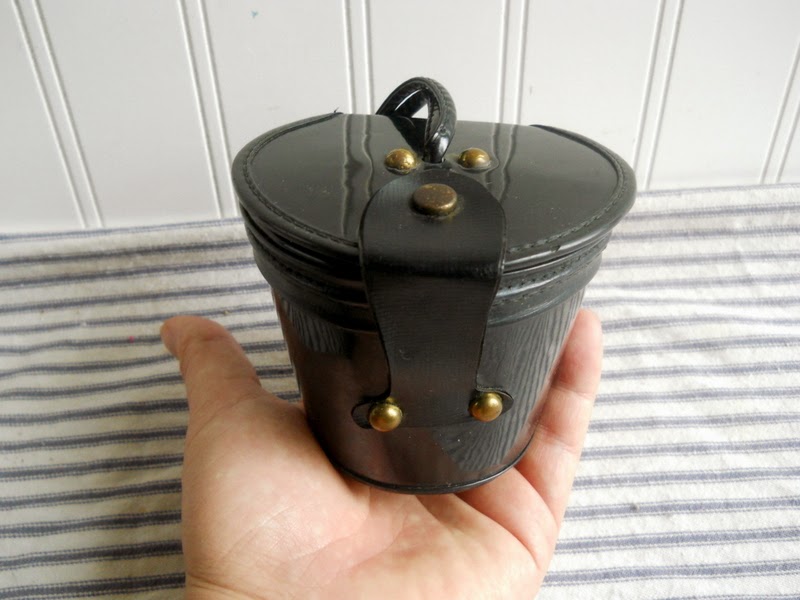 This cute small purse was also in the bag. I think it is a child's purse..a bit big for a doll purse. Black patent leather..I love the shape..wish it was me sized! 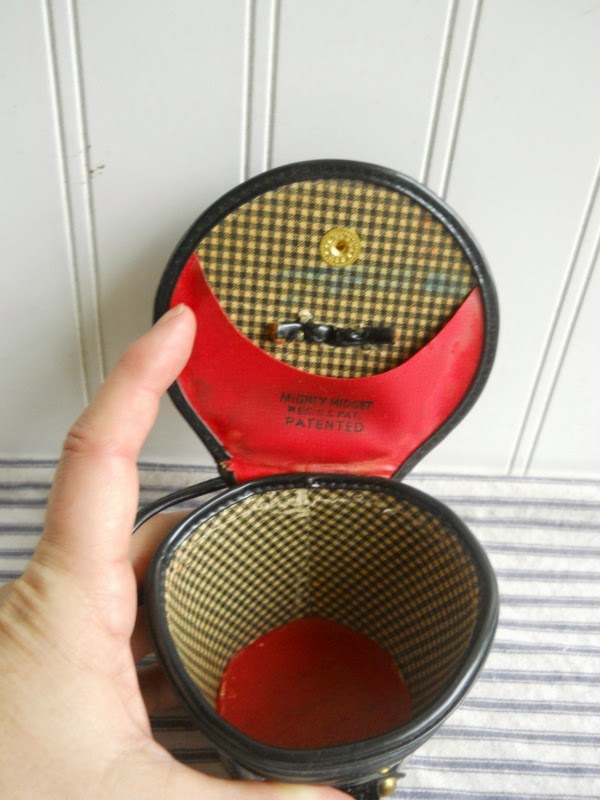 It is marked "Mighty Midget" on the inside with a patent number. I need to do some sleuthing.We got a lot more things I will be sharing later.

Oh YES..the hand grenade. Left you hanging. At this sale I was poking around in a tool shed attached to the car port (some in the South use these rooms as laundry rooms..small room at the top of the car port)It was dark and there was lots of tool-y rusty junk (that I like) so I was digging about. I saw the rim of something poking out from under a shelf and thought..that looks like an army helmet so I pulled it out. It was a WW2 German Nazi SS helmet. Inside were a bunch of things so I was looking..a morse code "tapper", a small French dictionary, post cards, silvery braid insignias that looked like they had been torn off officer's hats, a hand grenade..A HAND GRENADE??WTH? I quit poking and took it out the door and called the sale dude over. I said, "There is a hand grenade here!" He said.."Oh the family said if any military stuff showed up, they wanted to keep it so I can't sell it." I said, "I don''t want to BUY it..it is a hand grenade!" I told him the last sale I was at that they found a hand grenade (yes there has been more than one!) that they called the bomb squad and they came and took it and said it was live and very unstable. He didn't seem too concerned..oh just leave it there and I'll put it up. Okkkaaayy. I didn't hear of any explosions in Chattanooga this weekend so I guess it turned out ok. It may have not been a live one, but I wasn't going to try to find out! Never a dull moment. 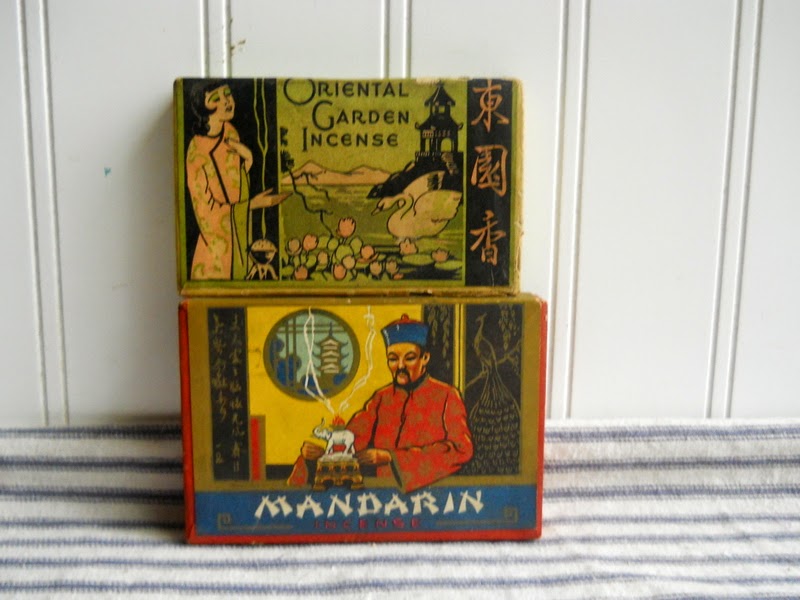 I sold these on EBay yesterday..old incense boxes. The top one was dated 1934 and was almost full of incense. I loved the graphics on these..almost kept them!

This is what I have been doing in the studio lately (besides watching Outlander on Starz ..read all those books and love that series!) This is a new twist on one of my "heads". 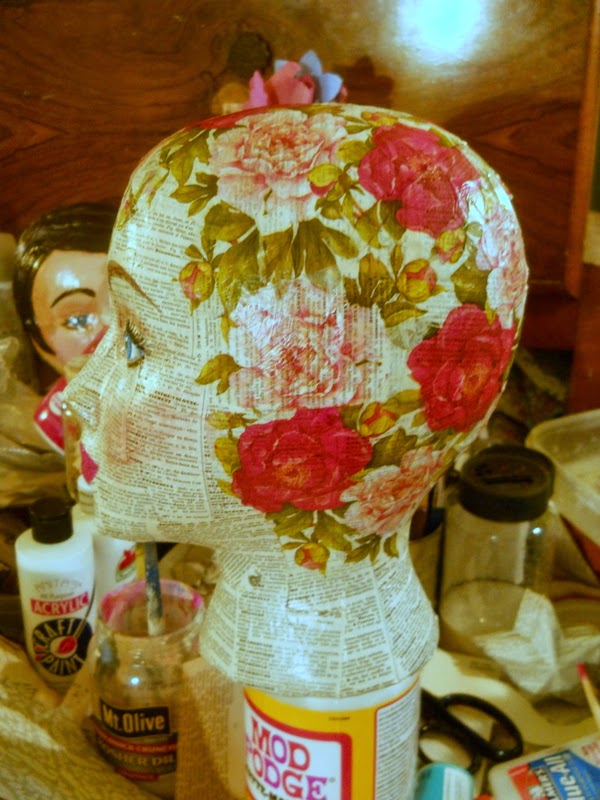 I think she looks like she is wearing one of those vintage floral swim caps! 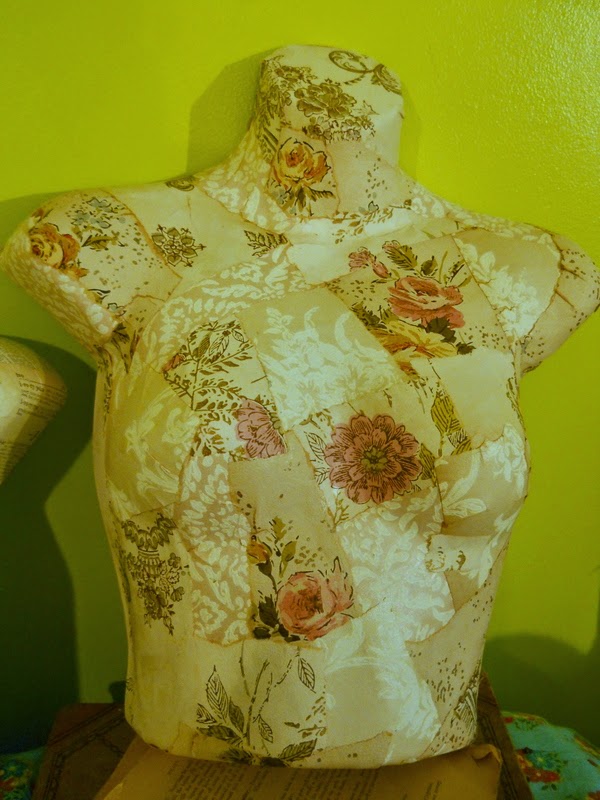 My other projects.The pix are bad..it is grey and rainy this morning so bad lighting. I made this one with all vintage wallpaper in creams and pinks.. 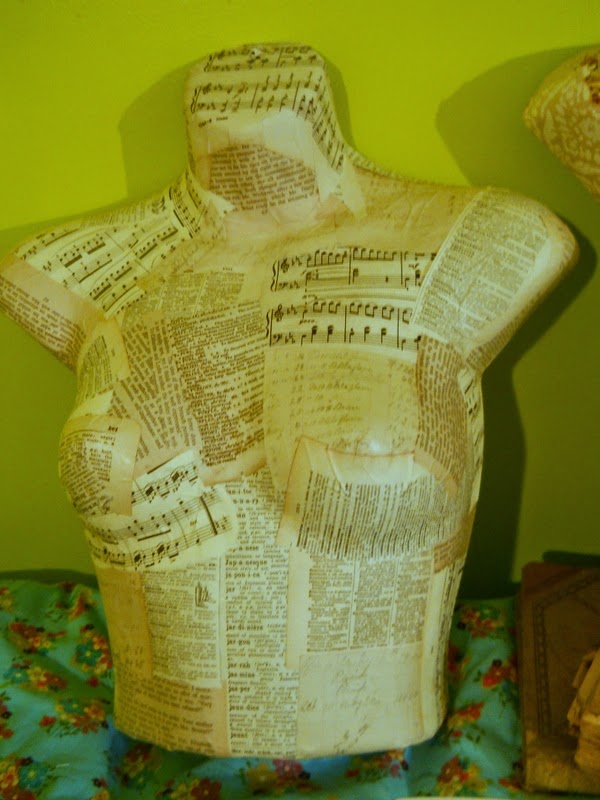 ..and this one with all old text, sheet music and ledger paper. Not sure if I am done yet..I am considering adding wings! 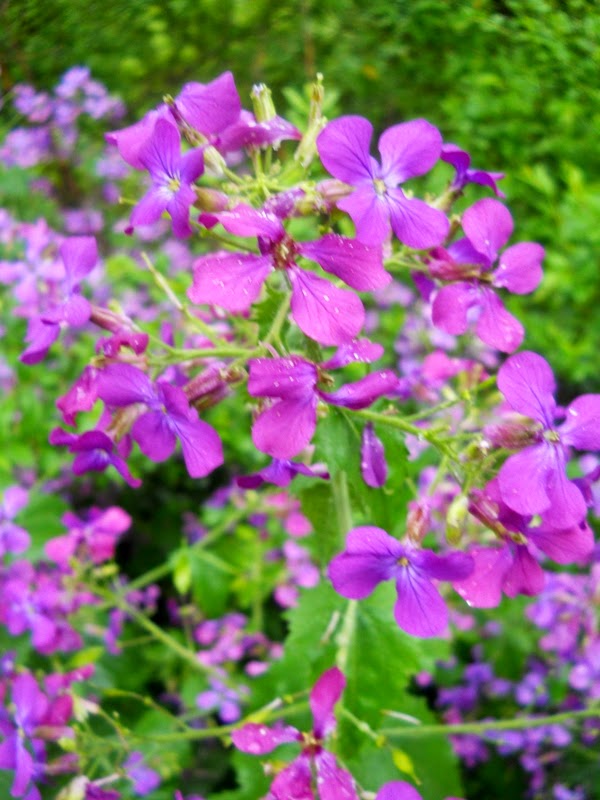 This is what is blooming outside this morning..this is Luminaria also known as honesty or money plant. It gets papery white quarter sized seed husks that when they dry and the outer husk is removed, there is a pearly translucent "innard". People use the dried ones as floral decoration. 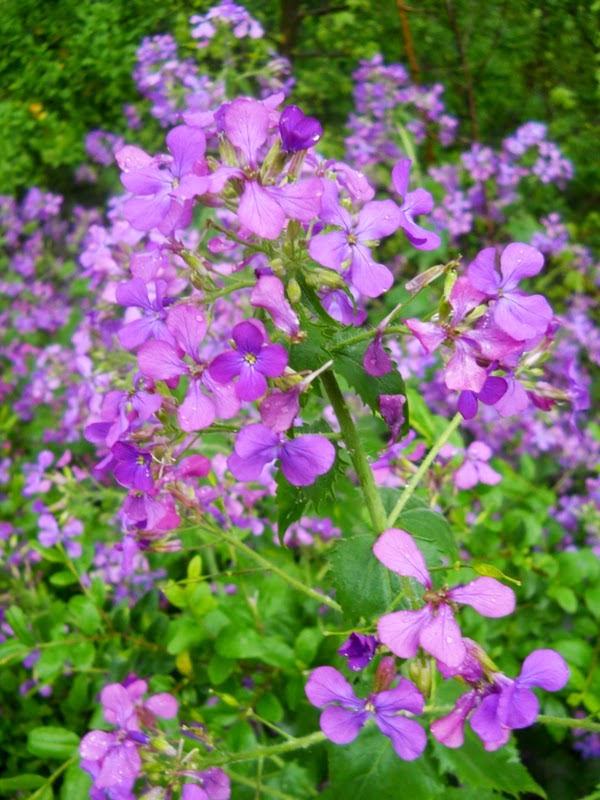 This is something I planted once and it just keeps reseeding (I scatter the seed a bit in the Fall to help it along). Pretty flowers in shades of purple..they just grow next to our driveway near the trees. 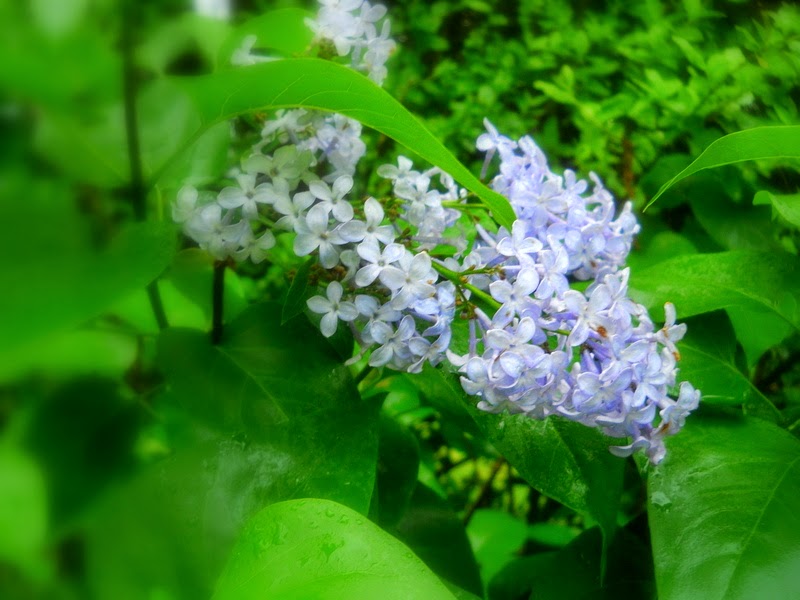 Also the lilacs are blooming! They are just startingbut I snipped a few to bring in and sniff.Hope your week is equally sweet! Til next time! Julia
Posted by hopeandjoyhome at 6:51 AM

Wow, that vintage quilt is stunning! You found some really cool stuff, but like you, I wouldn't have been too pleased finding a handgranade...possibly live...! I love lilacs, they are so pretty!

Wow you have the most amazing art...I love that bust with the swimmers cap collage...gorgeous!

And wow you got some great finds at the estate sale. Wha...a hand grenade?? And this is common? I live in a sheltered bubble...

You found some true vintage treasures - the quilt is divine !

As for the hand grenade; funny how some people just do not grasp how dangerous old ammunition and explosives can be. There have been many cases where very old explosives and land mines have taken limbs and even lives.

What great kids clothes finds!
And a grenade...yikes! I can't believe they weren't more concerned. But I'm glad you found the pieces so the family could have them.
We got lilacs last year as little baby sticks, but they are starting to bloom this year. I hope they get flowers soon!