Taking the Back Roads 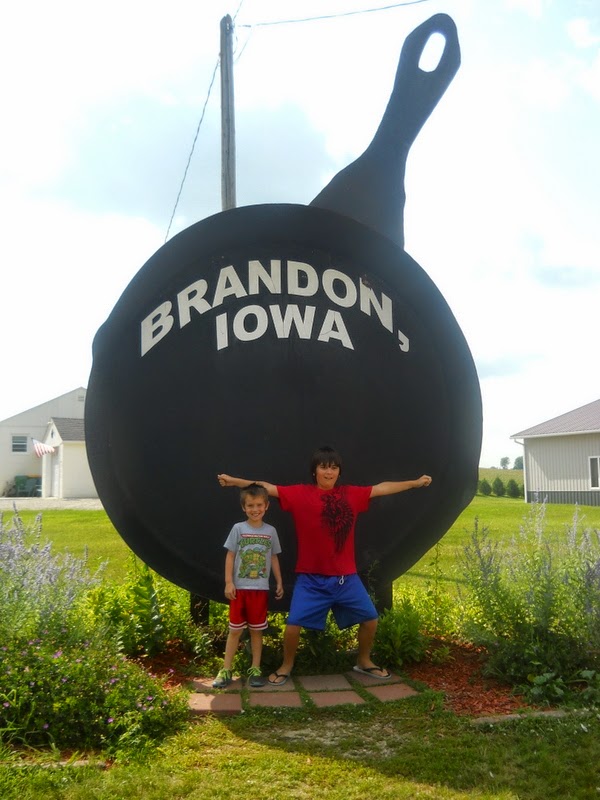 Hi guys! We live in East TN, but every summer make a trip back to our home state of South Dakota to see our family and friends. We usually take interstate from Nashville up through Kentucky, a piece of Illinois, across Missouri from St. Louis to Kansas City and north through Iowa and into SD. This year we took a different route and drove "straight" through Bloomington, Indiana to drop one of our pups off with our daughter. We then took smaller highways and some interstate roads nonstop through Illinois and Iowa and Minnesota into SD. It was dark most of the way or if I wasn't driving, I  was wedged into a corner of the waaaay back seat in a fetal position between the door and the cooler and suitcases (NOT recommended by the way!) On the return trip we took our time a bit more and traveled less like vampires and more like "real people"..complete with overnight hotel stops! We made a stop in Brandon, Iowa to see "The biggest cast iron skillet in Iowa" ..apparently it was at one point the biggest anywhere, but someone someplace out did them and they were downsized to merely Iowa! Our son and Grandson were happy to get out of the car! We also saw the Biggest Truckstop in the World" in Iowa..Iowa must have size issues! 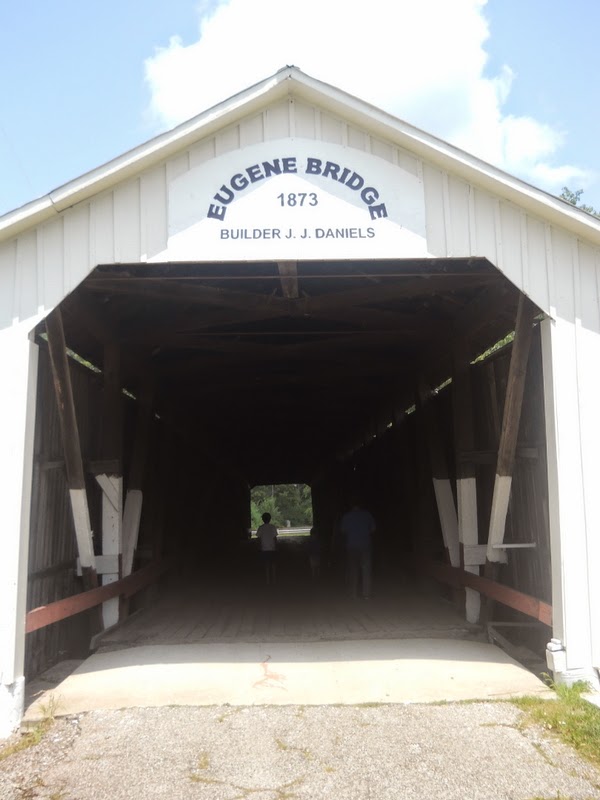 We stopped for drinks and a break in Eugene, Indiana and ran across their old covered bridge..literally! 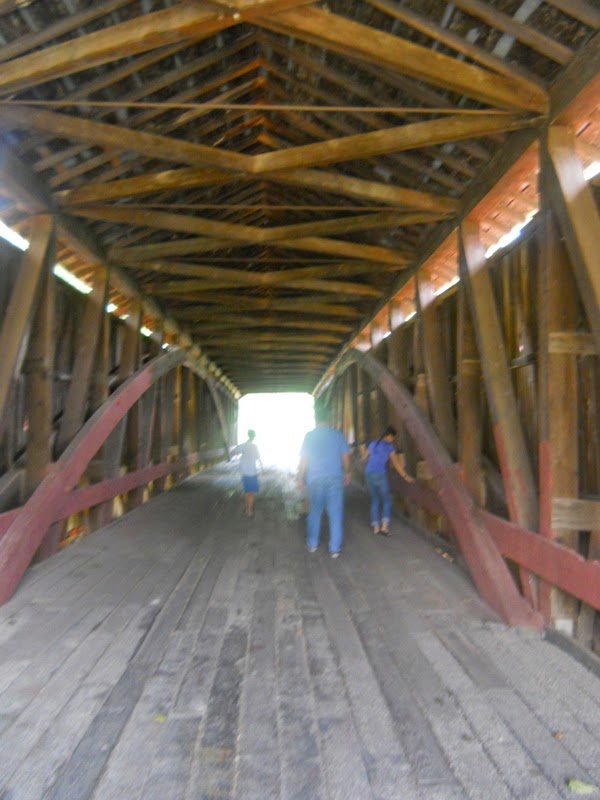 It was closed to auto traffic.. If I remember right, this is the Wabash River that you see out the side windows. 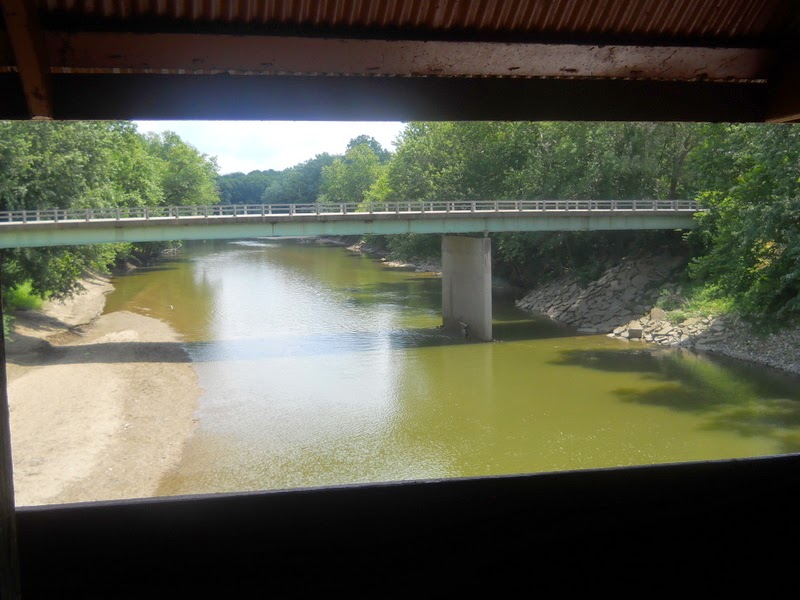 There were kids swimming in the river when we were there..looked like fun! (you can barely see them under the new bridges support) 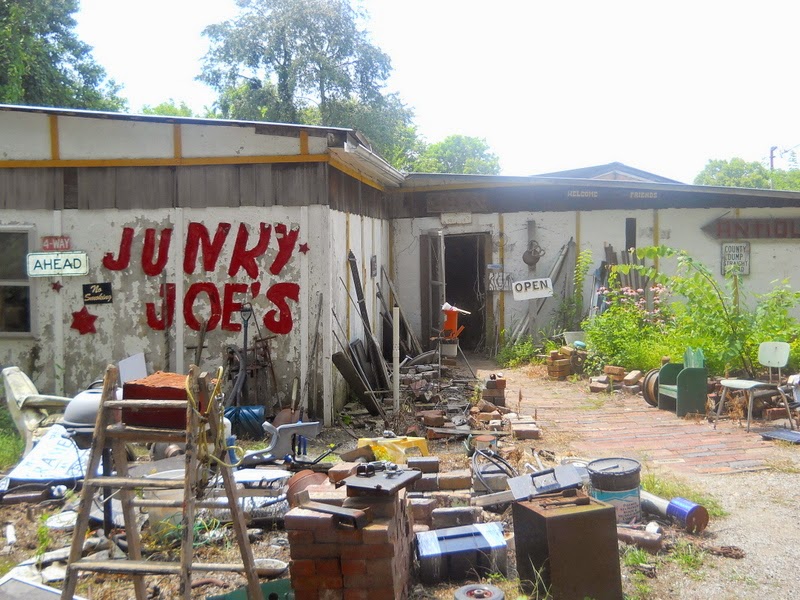 We saw a sign for Junky Joe's and of course had to stop! The outside was quite junky and I was a bit dubious, but I am a junking kind of girl so in we went! 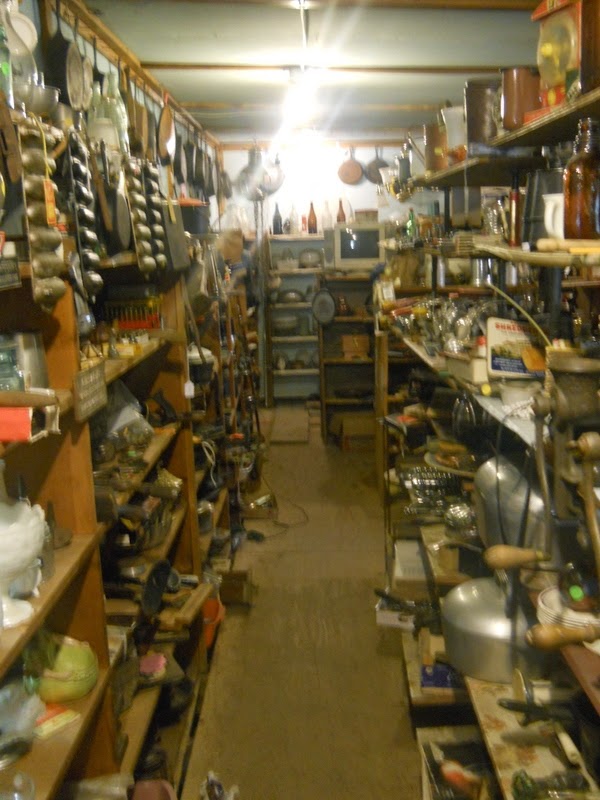 ...and man does he have junk! Shelves and shelves and rooms and bins full! 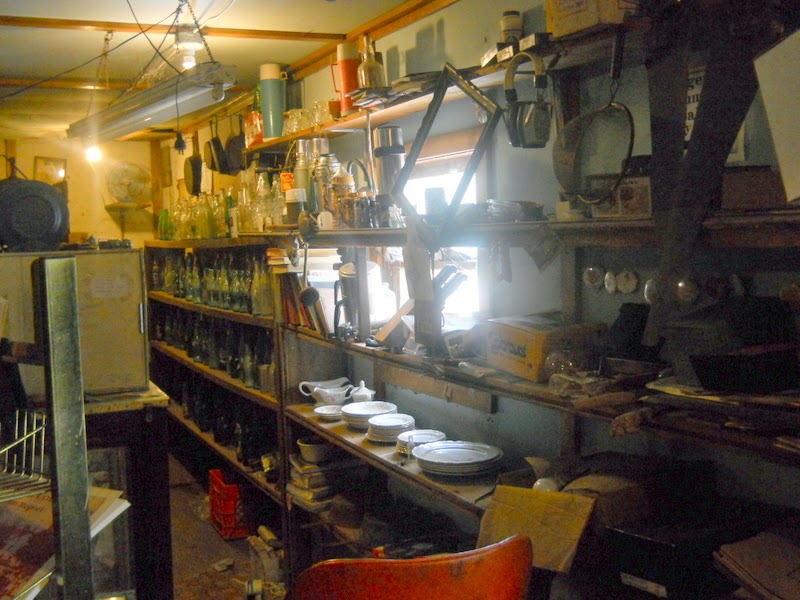 I think we were here an hour but you could spend a day.. 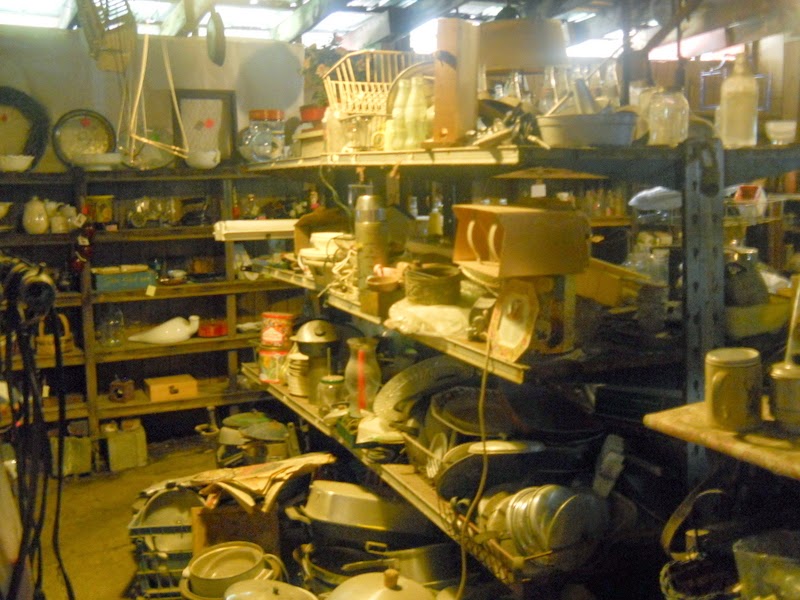 I believe the owner's name is actually Steve..Junky Joe was his grandpa. It is a small town and he had several locals dropping in looking for screen door hinges and clothesline while we were there (they had had a storm the night before he said) The closest place to find something to fix your issue! 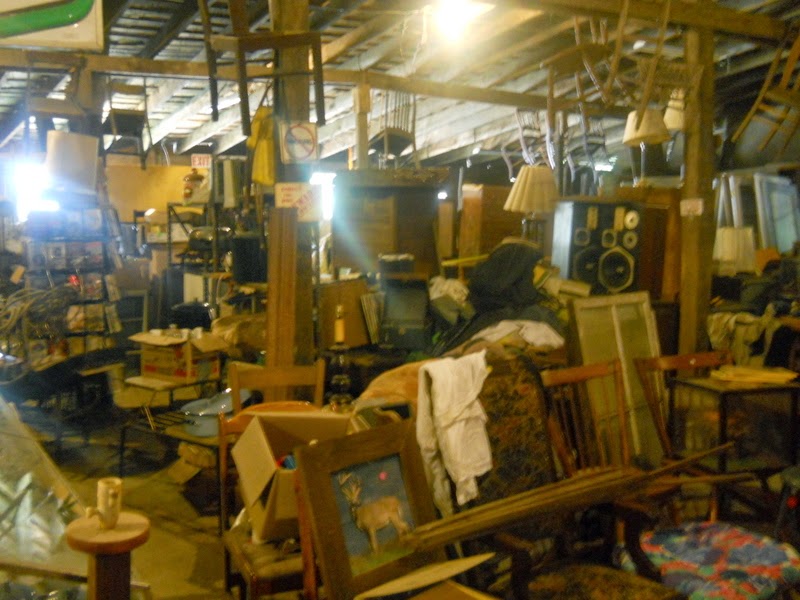 He has a big back room with lots of old doors and windows..none of which would fit in our car so I tried to not even look! 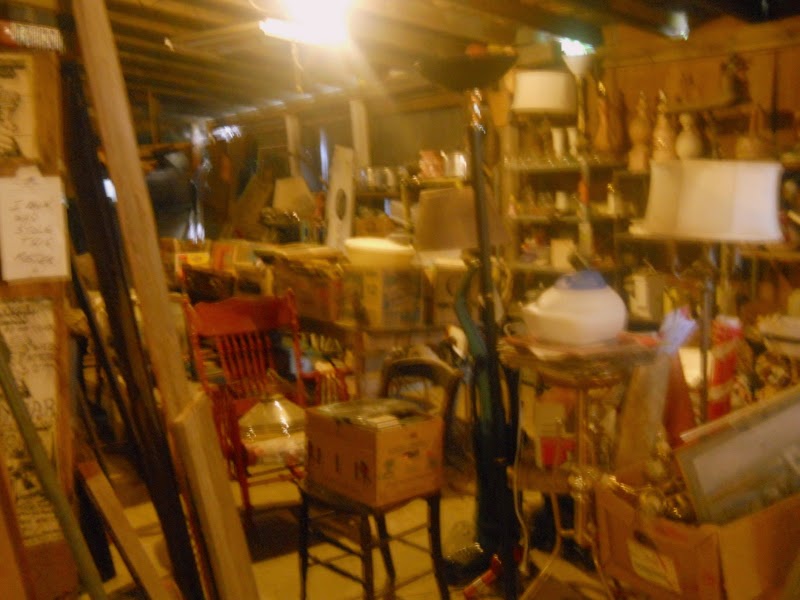 I did get a few things as we only had a tiny bit of room left in the car. 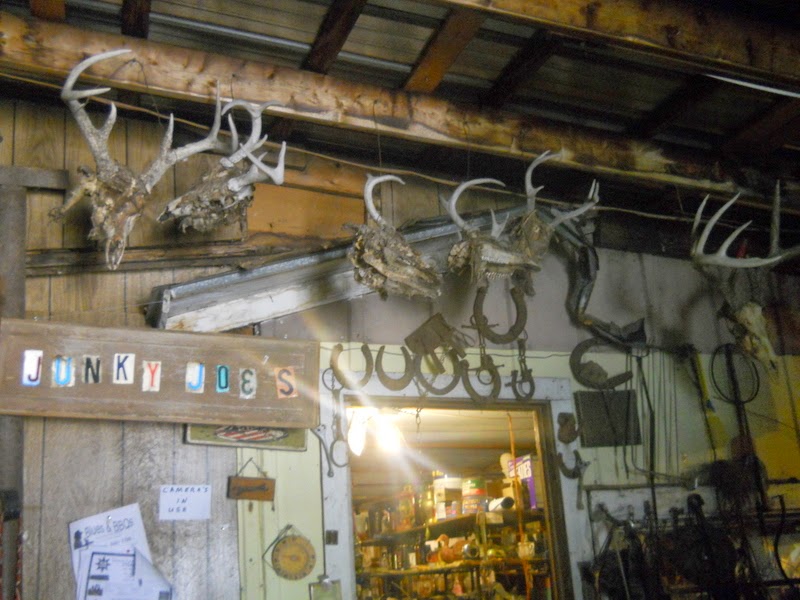 He told me to make sure I got a picture of his deer antlers.. 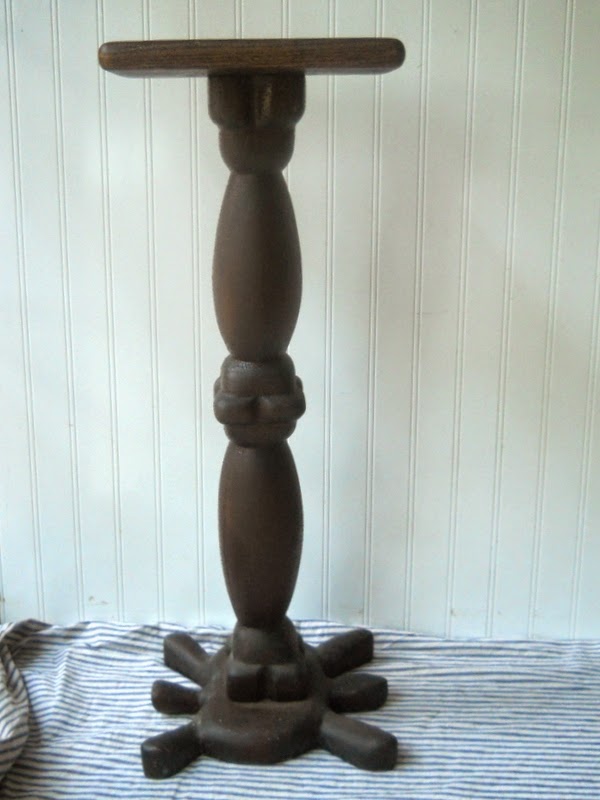 I got this very interesting old oak plant stand. The base is a turtle! It looks to be homemade as I have never seen one like it before and the turtle looks handmade. 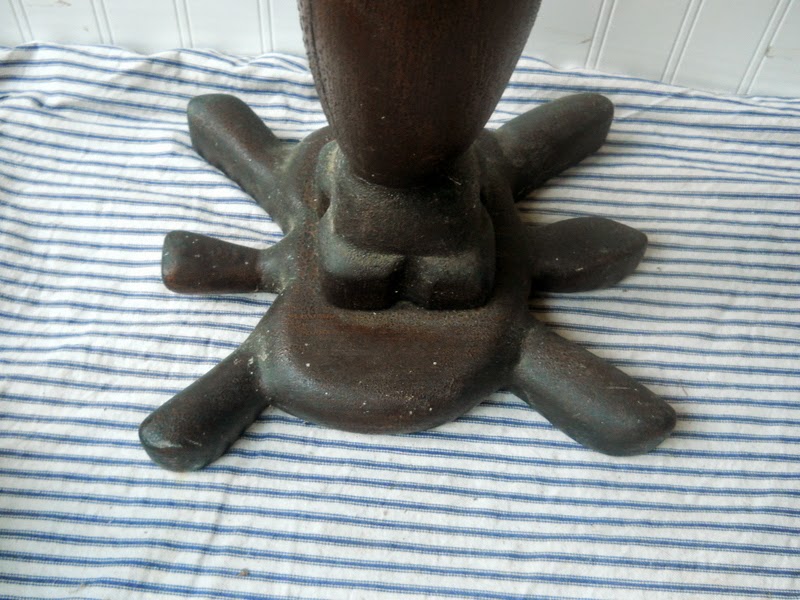 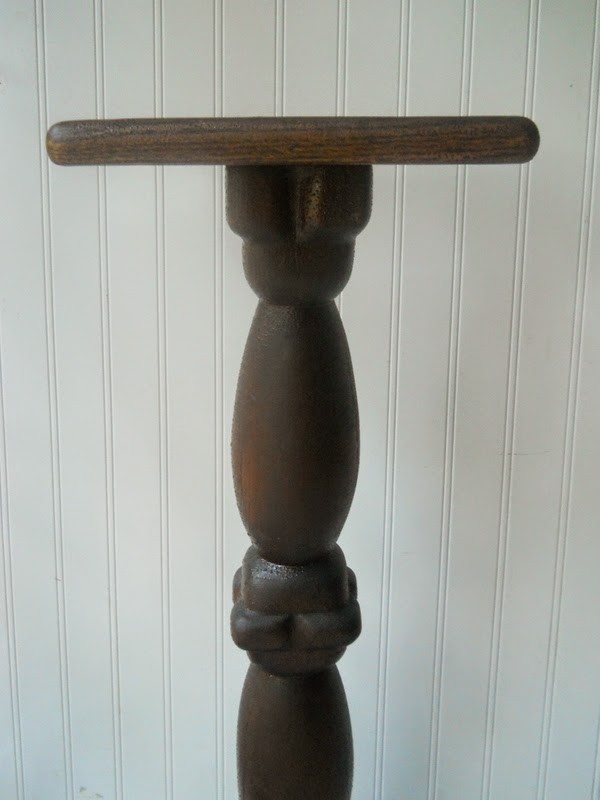 I am cleaning this up and putting it on EBay. I also got a bunch of rusty old springs (great place if you do altered art and mixed media for pieces parts!) I got a box of old sign letters to use, some vintage Christmas things and some old hinges. 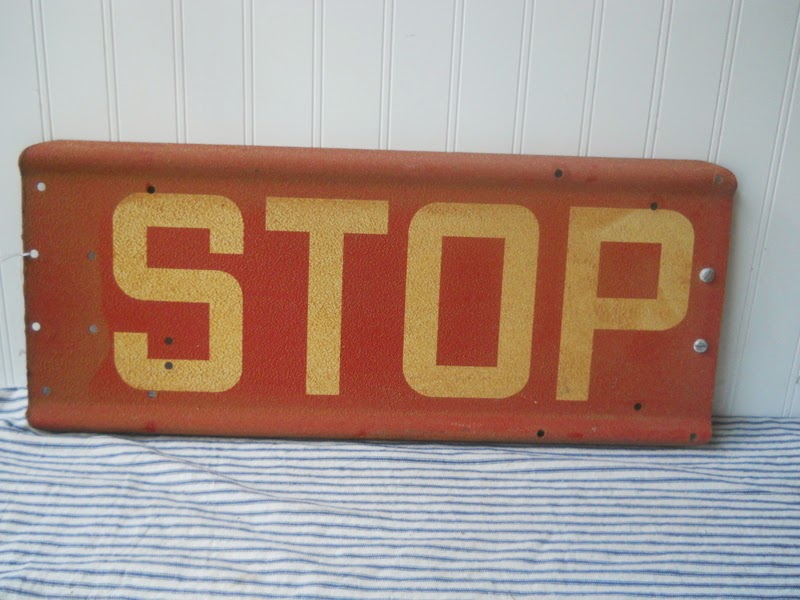 And this old metal stop sign that was off an old school bus...double sided and too cool! It was one of those that pops out when the door was opened.  So next time you travel, consider taking the back roads too! I have been working on converting my daughter's former bedroom into a studio this week, so stop back for photos on that! Til next time! Julia

Posted by hopeandjoyhome at 11:18 AM

Sounds like a really fun trip. And the junk store is awesome. My kind of shopping.

Your trip sounds like fun, other than the part about sitting "in a fetal position between the door, the cooler and the suitcases". :D

Junky Joes looked like a mess from the outside but inside it looks like one could spend hours and hours sorting through neat stuff. That little Turtle Table you found is really unique and cute, quite the treasure. I'm sure once you spruce it up a bit and put it on ebay it will sell quickly.