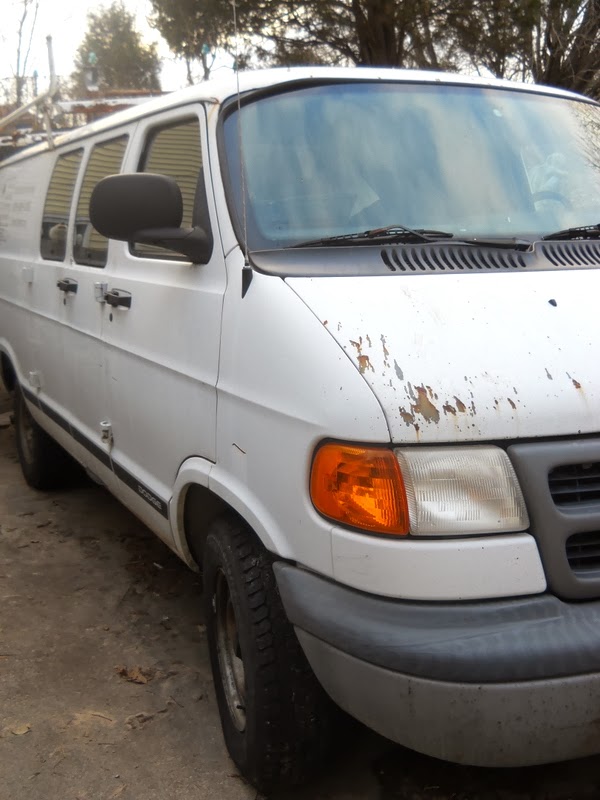 Hi guys! I have been MIA a couple weeks. I have BEEN here..just busy! The beautiful piece of machinery you see above is our "new" van White Lightning. We got her on Ebay for $900 and picked her up in KY a month or so ago. She came already named. She was being used by a company that worked for a school district doing their "computer-y things". She has a bit of rust on her nose and ghost lettering on her side from her former decal. She has 2 seats and an extended back end that is HUGE! On the down side the heat only works on high (and not on the passenger side) and it has a high flautin' looking radio that we could not get to work at all. I did Google and there was something about "if you replace the battery (which we did) the radio may need to be reset to work"..boogers.

So last week Ed got a couple days off work and we headed off to a 2 day antique auction in Ohio. We barely made it out of TN as it started snowing..the kids were off school all 3 days we were gone! (when I say "kids" I am including our 22 year old daughter..I did not leave children home alone!) So we rolled "old school" with me holding a boombox in my lap and in charge of keeping a radio station! 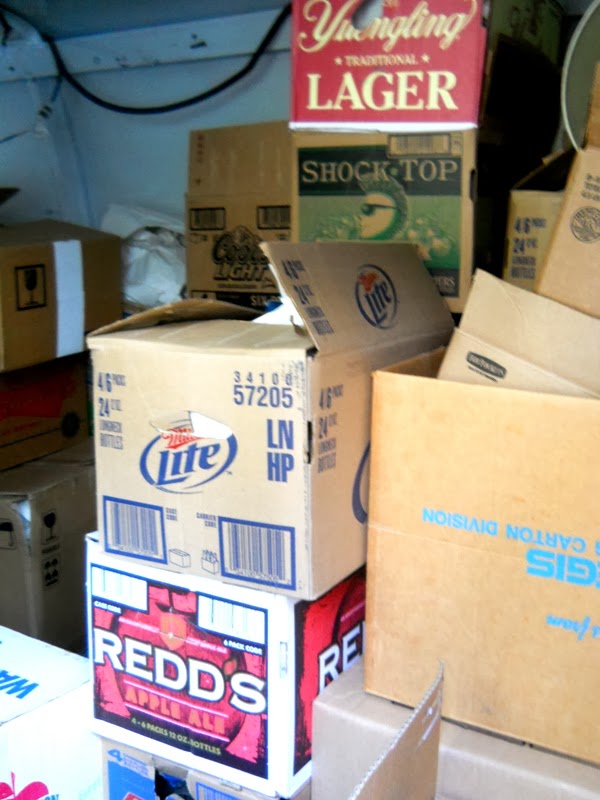 We got lots of stuff. No we did not knock off a liquor store..that is just the boxes they had. We had more than this, I took this pic tonight. A bunch of boxes have already been off loaded. Some things are already in my local antiques/vintage booth. I pulled 90% of my old items in my booths and I am refilling with "new" things. I am redo-ing some other things in there too and if I can remember to take my camera, I will show you! We got a lot of pottery..Weller, McCoy, Shawnee and more, lots of glass from Victorian and depression to Fenton and Fostoria. We got dishes and some Fire King (they had Jade-ite that I wanted, but there were people there bidding well over what it is selling for online so I painfully had to pass). 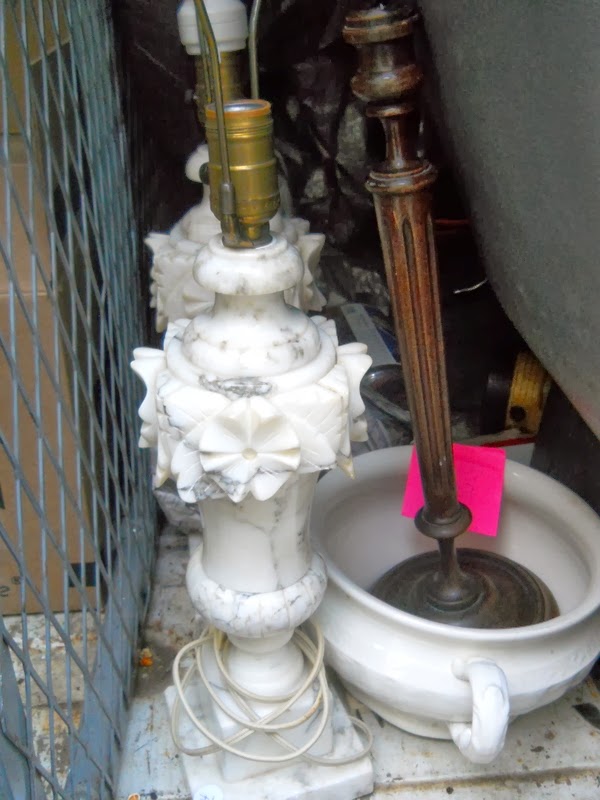 I did get these pretty alabaster lamps..and yes..that IS a potty..I wasn't trying to get that, it just came along with some other things! Last night I was trying to fix an old frame I bought, so I took it apart. Inside behind the old illustration of a girl were and even older illustration of "Daniel Ward's residence in Fairfield Co. Ohio (no clue who he is but it was cool) a colored Currier and Ives print (original) of Robert Burns and his Scottish lass.It had some tears but was what I put back into the frame. The coolest was a large antique photo of a large group of uniformed men on the steps of a huge marble columned building. They had a banner that said "Columbia Commandery No. 2" There were 5 cent stamps on the back that were canceled November 2, 1865. I Googled and found out that they were a group of Knights Templar (Freemasons) from Washington, DC. They had established themselves Jan. 1865. It is very cool and headed for Ebay! I WILL be checking behind the frames of all the other antique framed prints I bought! 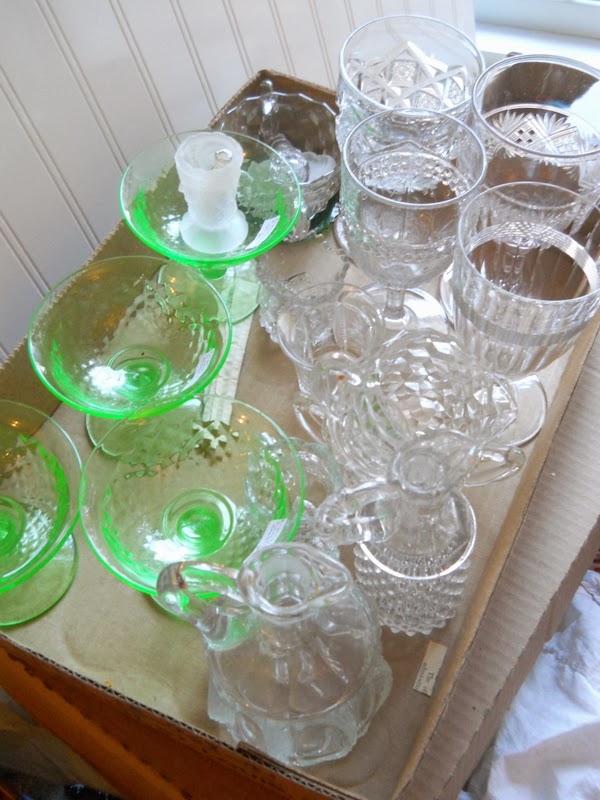 The trip home wasn't as "fun" as going up. We left at 8pm when we finished packing the van at the aution house. Ed drove until we  got through Cincinnati. He is used to going to bed at 7pm and getting up at 2 am so he was tired. I tried to sleep while he drove. I wrapped my eternity scarf around my head a few times to keep my head from bobbing and slung my head in the shoulder strap. I am a Nervous Nellie passenger though. I kept jumping awake at every "bad noise" expecting to find myself in a Mid-air "Bad Boys 2" car roll! So when I took over there was no music so I sang all the songs that popped into my head to keep myself awake! Apparently my caterwauling of Queen's Bohemian Rhapsody was not enough to keep Ed awake! About 120 miles from home, the van started doing "A Weird Thing" (can you tell I am not an automechanic?) It would have a "hiccup" about every 2 miles where it would cut out... nerve wracking, but we made it home! Above is some of the depression glass and Victorian glass..tip of the iceberg. I am not generally a glass person, but it was a good price! 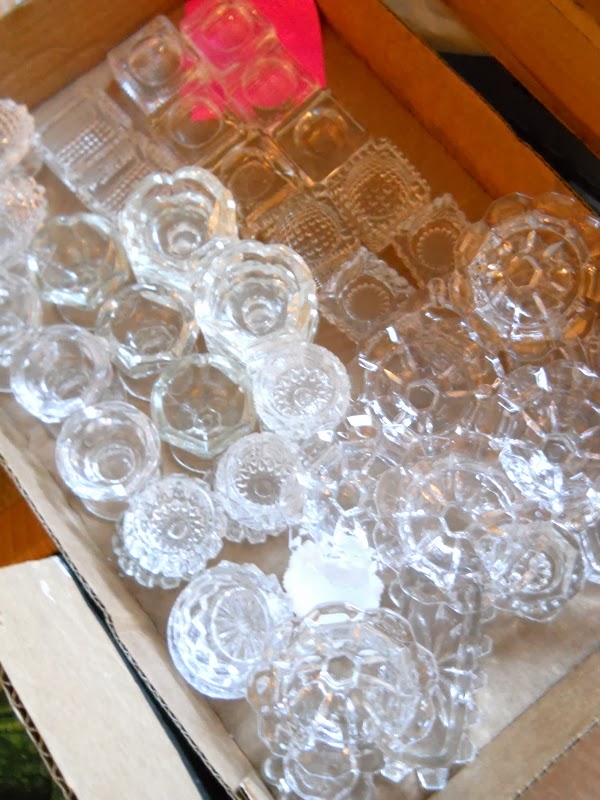 There were lots of salt dips or cellars. They are so cute! Great for repurposing. 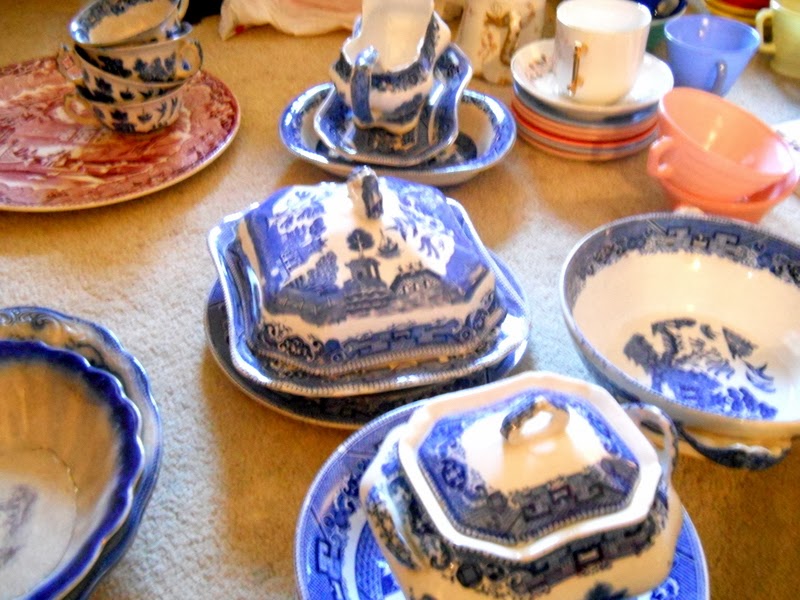 I got lots of Blue willow of various makers and ages. Some went to my booth and some is going online. 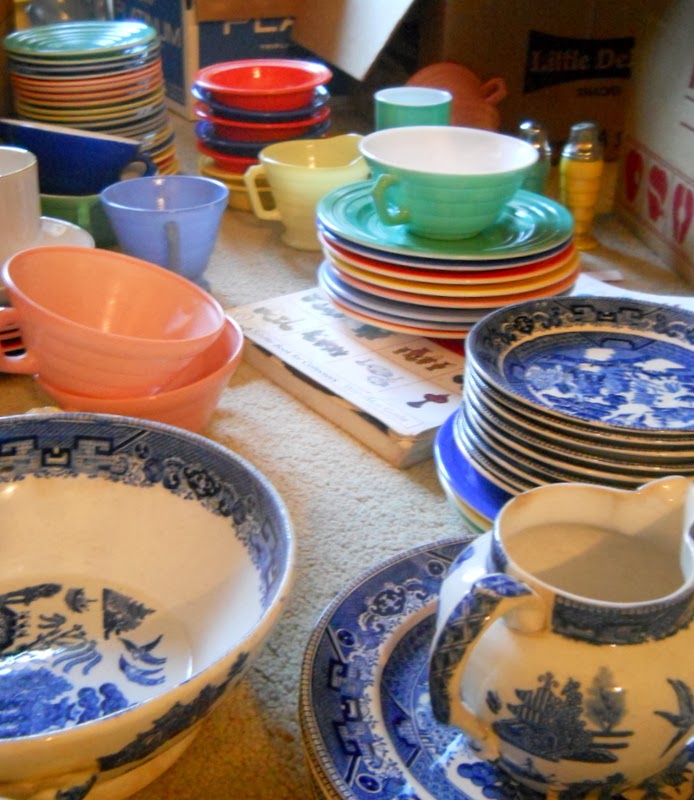 Ed bought a bunch of Hazel Atlas Platonite Moderntone. It is a 30's-40's dishware.I think it is cute, but it has  not been a strong seller for me previously. I put some in my booth..I think I priced the dinner plates at $5 which is less than some plates you can buy at KMart and Walmart!

I also went "estate sale-ing" yesterday morning (as if I didn't have boxes of glass and pottery all over my living room and kitchen to deal with!) I was up at 5 am and out the door. It was 27 degrees. I was wearing leggings and jeans, 2 pairs of sox,2 tee shirts, 2 sweaters, an insulated hood, a polar fleece jacket, a scarf, a hat and gloves! I was NOT styling! I was driving down the interstate, chugging coffee out of Ed's "Big Bubba" thermos..which is basically a coffeepot with a handle..eating Sugar Corn Pops cereal straight out of the box, daring truckers to judge me! You have to get to estate sales early if you have any hope of getting a low line number. I was there 2 hours early and was number 21! The house was small so they only let 15 people in first. I finally got in..they had cool old stuff, but it was priced too high for me for the most part. That is what I don't understand when people grumble at estate sales about "dealers" being there..It was alright prices if you were keeping it for yourself but I have to be able to resell it! I did score a box of vintage wallpaper rolls in the basement. Off to sale #2. I got more things there even though I got there 10 minutes late..you just never know. I ended up getting film interviewed for a advertising piece the estate sales people were supposedly taking to a conference. I was like, "I have crazy hair and my glasses with the tape on the bow!" The camera lady was all.."You look great!" LIAR!  Oh well!

Today between our grandson and son's basketball games, we went to see a barn some buddies are cleaning out. We got some things there too..more crusty, rusty farmy things..right up my alley! I WILL be back sharing photos of more finds and some pix of things I am doing in my booth. 'Til next time! Julia

Posted by hopeandjoyhome at 4:36 PM

I laughed all through reading this. I'm anxious to see more photos.