And now for something completely different Hi guys! I decided to steal a line from Monty Python and share something besides my latest projects (which I still have more of!) and share some local scenery. Spring has sprung here. The Bradford pear trees are already done flowering. This has been an odd spring..it has been early and everything seemed to pop at once! I think these above are some sort of ornamental plum tree. I don't recall ever seeing fruit on these. 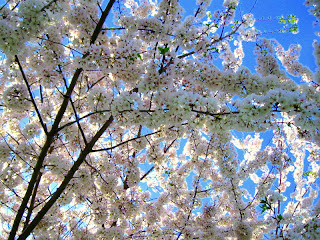 They were just covered and smelled fabulous. There were tons of bees buzzing about! 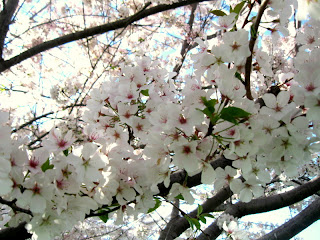 They are in the local recreation complex. I took these while my 9 yr old was practicing. He had practice tonight and left his entire ball bag with helmet, glove and bat inside, sitting on the bleachers. We went right back and it was gone. I am hoping one of his coaches or the other parents picked it up. I have made calls and left messages but no answer yet. I believe we will be saying a prayer for intercession to St. Anthony tonight! Edited to add..YAY! His coach picked it up! (Thank you St.Anthony!) He would have been in hot water with his dad even though I seem to recall his dad doing the same thing with a bag with an entire softball teams worth of bats, balls, catchers equipment AND my daughters softball photos inside and we never got that back! 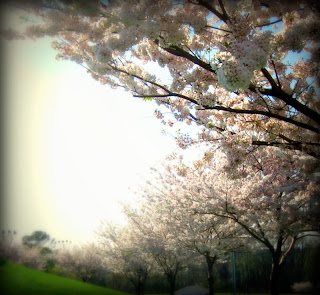 Picasa..my photo editing software (free online download) just added a bunch of new editing options. They picked up a lot of ones that the now defunct Picnik used to have. So fun to play! I edited the edges of this one. 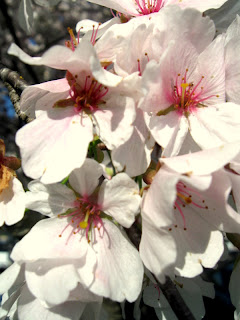 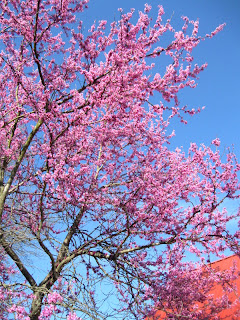 Not sure what this is either..but very pretty. 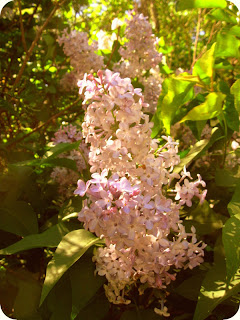 This was the 1960's editing option..it adds a yellowish cast of a vintage photo..fun! These are the lilacs blooming in my backyard. 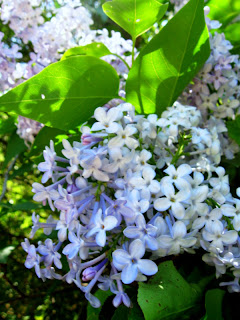 They seem paler purple this year...hmmm..I may have to Miracle Gro them again. 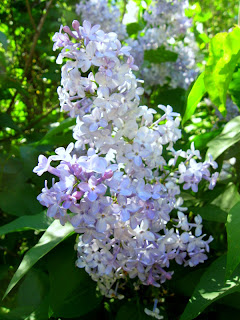 They do smell heavenly! When we first moved here I missed their blooming. I am used to lilacs blooming in May up north..not March! We have already mowed the lawn here! The pollen is so thick in the air you can smell it! Thank goodness after 23 years in the South I seem to be slowly getting used to it. It used to knock me out. My poor honey is still a sniffler! 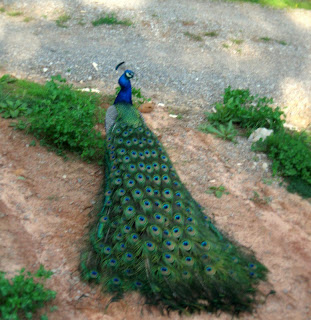 One of the marauding peacocks. This guy has been especially noisy lately. Usually there are 6 of them and now only 3 come..I can hear the rest at the neighbors. Maybe there was some sort of power struggle? This guy was the alpha peacock. He was showing off his tail this week to the other younger 2 peacock males. One doesn't have his tail feathers yet and one only has 3 feathers..his first. He has been practicing showing those pitiful things off and it as if THIS guy says, "Oh yeah? Well look at THIS!" (men!) 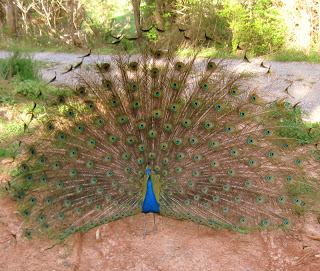 I had a hard time getting full frontal feathers with this guy..he kept trying to turn his back on me! Sometimes I have to stop and remember that it is unusual to have 6 peacocks roaming your yard! They leave all the hens at home and come up to eat my cat's food and loll about. I can do a mean peacock imitation now! Some think that they sound like a woman screaming..they are loud! "HALP! HALP!" Hope you have a colorful week. Stop back.. I have more to share! Til next time! Julia
Posted by hopeandjoyhome at 6:14 PM

Everything is flowering around here, too! The mystery tree you have might be a redbud. We had one in my yard when I was a kid, and it looks pretty similar.