Back to the Farm 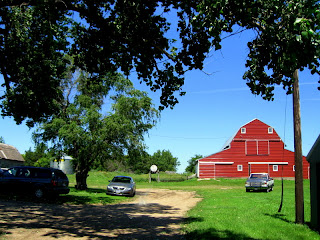 Most 4th of July's my family and I take our annual 18-20 hour drive back to my parent's farm in South Dakota. We have missed some years and there was much complaining with the kids because apparently, 4th of July is not the same unless spent with Grampa and Gramma and all the cousins. We pack our van with suitcases, road food (pure junk), coolers of drinks and lately, laptops, Ipods, DVD players and the like and take turns driving all night singing along to the radio and passing familiar landmarks... Titan's Stadium, The St. Louis Arch, that one gas station in St. Joseph that we always somehow end up at. This year we had to detour through Des Moines due to the flooding. We roll into the farm very frazzled and road weary and just so glad to both be there and out of the van! 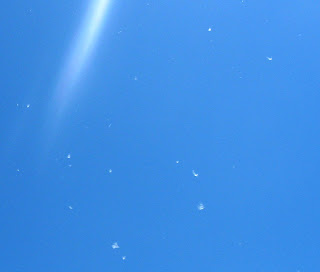 This year we were greeted with a "snowstorm" of cottonwood fuzzies floating down from the big old cottonwoods that line my parents driveway. SD is always at least breezy and I always forget the noise that the cottonwoods make with their waxy, heart shaped leaves rustling in the wind. I always have to crush and sniff a leaf or 2 to bring back the smells of my childhood. 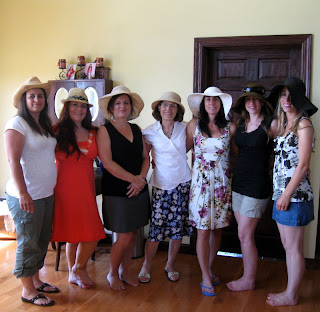 It was hugs all around to my parents and the sisters, BIL's and nieces and nephews that were already there and then we were straight into the shower and the girls were then out the door to my sister's house. She was having a party for us "girls" and we were to all wear hats and be prepared to sing karaoke..or else! I caterwauled a rousing rendition of B. Spears "Hit me Baby One More Time" thankyouverymuch.This is my mom in the middle (she is 70!) and all of us sisters. I am the 3rd from the left..I somehow always manage to pick the most unappealing pose possible for the camera..let's see...how can I appear at my widest?! LOL Anyways..here are the "old girls".. 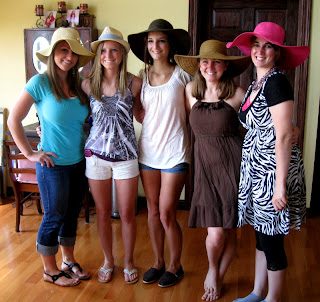 and these are the "young girls". The ones on the left and middle are my daughters Hope and Alexa and the other 3 are my nieces, Cory, Nicki, and Ali 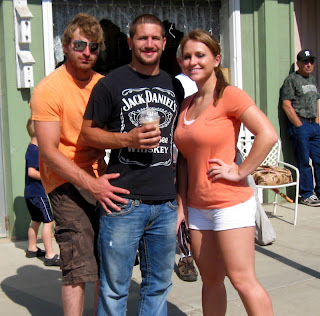 PARADE DAY!! My hometown usually has a great parade. We watch on Main Street in front omy my brother and SIL's coffeeshop. These are former candy snatchers..now too old they are happy to watch the little cousins snatch up parade candy and maybe sneak a piece or 2. This is 2 of my nephews Damian and Bryce and my girl Hope. That is my dad holding up the wall of the coffeeshop. He is 74 and looking good! My brother David and SIL Carol make the BEST frozen coffees I have ever had... they beat Starbucks all to heck! ( Simply Charming in Redfield South Dakota) 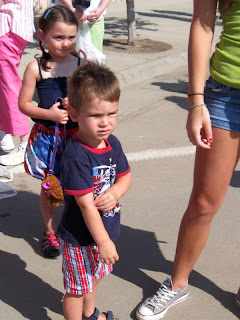 A couple of the "little kids" in their 4th of July attire.. My grandson Hunter and grand niece Avery watching the parade. I realized I never took one pic of the parade..just all my family! 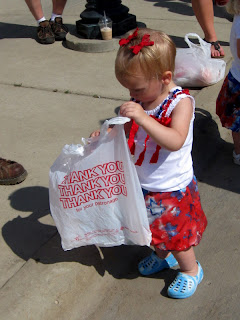 My niece Annika inspecting her candy. Her mom my sis Aron made all the little girls matching skirts! 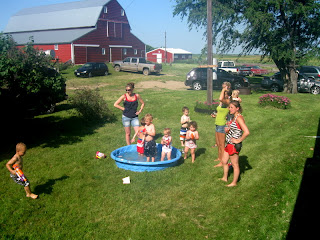 Later in the day, cooling off at Gramma's pool..lol..it looks a bit pitiful but they did have fun. The boys were running amok with the hose and squirtguns. It was HOT..the haze on this pic is where my lens fogged over when I stepped outside! 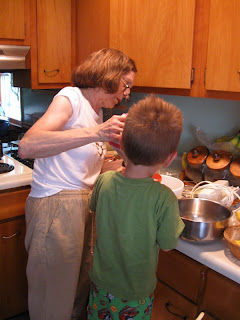 Later in the week..Hunter making cookies with his great gramma. 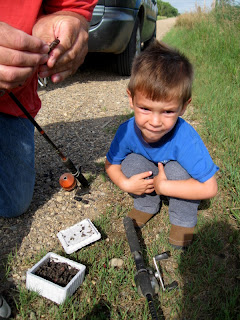 There is always the family fishing morning if weather permits. We fish for bullheads by my husband's Grandpa and Gramma's old farmplace. His cousin lives there now. We are strictly catch and release. I usually take pics, eat sunflower seeds and check the gravel road for heart shaped rocks. The kids get the poles and my husband is the hook baiter and fish remover. 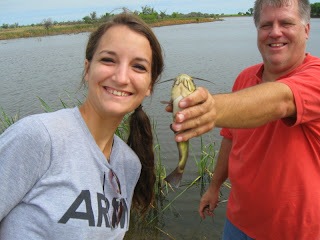 Alexa caught the biggest fish..and also the littlest one! Hope deemed herself mosquito bait (she is..they love her) and chose to stay at the farm. Actually it was cool and breezy and I guess the mosquitos were still sleeping! 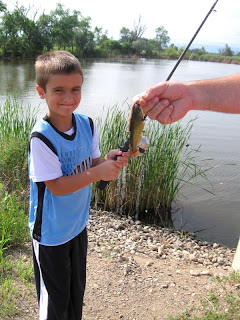 Our 8 yr old Jack was very excited. He thought every nibble was "the big one"! 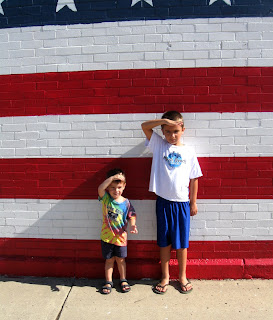 Final pic, the boys in front of a flag that is painted on the side of one of the businesses in town..Jack with an impromptu but fitting salute and Hunter always the copycat. Hope you had a great Independence day! More pics of the farm and whatnot will be coming later! Til next time! Julia
Posted by hopeandjoyhome at 4:53 PM

Looks like a great trip and great memories to get you by until the next trip. Great pics, a beautiful glimpse to another American home town.